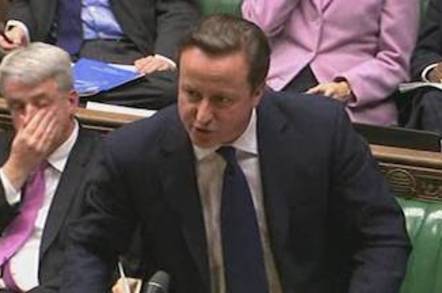 He said during PMQs in Parliament on Wednesday that while it was right that BT should be more transparent about its rollout plans – so that rivals could seek out biz opportunities in parts of the country where the telecoms giant's network tentacles won't reach – Brits were failing to spot the positive aspects of the project.

I have had this discussion with BT, and I am happy to hold it again. I know that the Under-Secretary of State for Culture, Media and Sport, my hon. friend Mr [Ed] Vaizey, will take up the specific point, which is that we have asked BT to give more detail in their rollout plans about which homes and areas will get broadband so that other companies and organisations are then able to see whether there are different ways of filling any gaps.

However, I do not agree with some who think that BT has somehow not been putting its shoulder to the wheel. A massive investment is going into broadband: 10,000 homes and businesses are being connected every week.

This is a real success story for our country.

His comments came in response to a question from LibDem politico Alan Reid, who had asked Cameron to nudge BT "to produce clear plans for the billions of pounds of taxpayers' money it is getting."

It comes after yet another waspish attack from MPs sitting on the Public Accounts Committee, who once again criticised Whitehall's handling of the Broadband Delivery UK programme for failing to show any "meaningful competition" by allowing BT to bag all the local authority contracts. ®