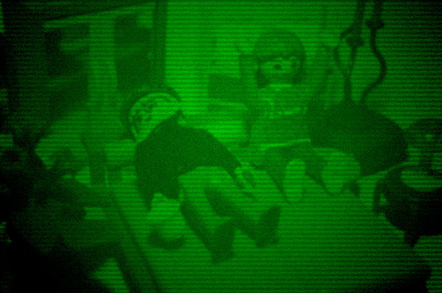 University of Michigan boffins have created a tiny light detector that reaches into the infared, and is already small enough to be delivered as a contact lens.

The key trick, the researchers say, is that they've created an infrared detector that doesn't need the cooling demanded by most devices that currently operate at the mid-to-far infrared wavelengths.

As UoM assistant professor of electrical and computer engineerings Zhaohui Zhong says, the design can be built so thin that “It can be stacked on a contact lens or integrated with a cell phone.”

The university's release explains that while the near infrared (that is, wavelengths closest to visible light) isn't too hard to deal with, medium- and far-infrared sensors typically need to be at low temperatures.

Their work, published in Nature Nanotechnology (abstract), started with graphene because it is sensitive to a broad range of wavelengths (including the infrared).

However, graphene is quite insensitive as a photodetector, yielding “tens of milliamps per watt” because it's only offering a single layer of carbon atoms to the incoming light. That, Zhong said, is “a hundred to a thousand times lower than what a commercial device would require”.

The variation in the current in the bottom layer, rather than the electrons released, is what indicates the light hitting the detector, and the researchers claim that they achieved “mid-infrared responsivity higher than 1A per Watt”, making the device comparable with commercial detectors. ®

Iris-scanner defeated with a camera in night mode, a contact lens, and a printer

Captain Morgan told off for Snapchat lens: That grog be aimed at kiddies