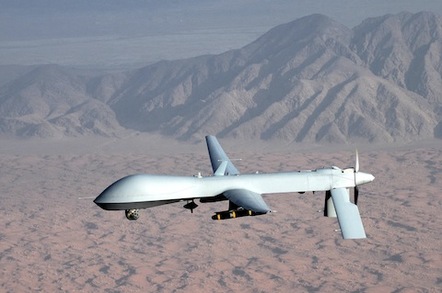 South Korean has recovered two crashed drones over the past week which it suspects have been used by Pyongyang spooks to spy on key locations including president Park Geun-hye’s official residence.

The Korean army is currently examining a UAV fitted with a digital camera which was found on Baengnyeong island in the Yellow Sea near the border with the North, according to the Korea Joongang Daily.

A military source told the paper that they are treating it as a Norks spy drone, given that it crashed on the same day that North Korea fired hundreds of artillery shells towards the disputed border.

“Since Baengnyeong island is far from land, the distance makes it almost impossible for ordinary citizens to send a drone all that distance,” the source added.

“The machine is not used by the Korean Army, and broadcasting stations have denied that they dispatched it.”

The find comes just a week after another drone was discovered, this time close to the DMZ, in Jori-eup near Paju.

Images recovered from the digital camera on board showed the unmanned vehicle had apparently flown over central Seoul snapping various landmarks including Gyeongbok palace and the president’s residence, known as the Blue House.

The drone is said to have flown 300 metres above the ground, twice as high as the “helicams” used by TV stations to shoot aerial footage, although the resolution of the pics was poor, the report said.

The discoveries come just a month after the Pentagon revealed in a report to Congress that North Korea has developed UAVs capable of attacking ground targets, likely to be based on a stolen US Raytheon MQM-107 Streaker.

These latest discoveries will alarm Seoul officials braced for a terrorist attack on home soil from a Kim Jong-un regime still flexing its muscles. ®