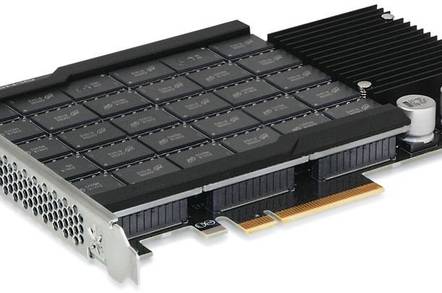 Fusion-io can cram more data into its ioMemory flash storage without cramping performance – at least that’s what it’s claiming about its NVM Compression technology.

We are told NVM Compression is “a flash-aware interface that can double the useable capacity of ioMemory flash while eliminating the performance impact associated with disk-era compression algorithms commonly used with flash SSDs.”

The MariaDB Foundation announced the general availability of MariaDB 10 on 31 March and it is “many times faster than previous generations of MariaDB and especially legacy database MySQL thanks to new features including parallel replication and a further advanced group commit.”

An effective capacity doubling was achieved using NVM Compression with MariaDB and MySQL. Michael "Monty" Widenius, the creator of MySQL and MariaDB, was pleased: “The results MariaDB saw in testing NVM Compression were astounding, and it’s very exciting to deliver new innovation in flash-aware MySQL performance with Fusion-io.”

NVM Compression will also boost usable flash memory capacity by up to 50 per cent in MySQL databases from Oracle, Percona and SkySQL.

The Fusion-io pitch is that it’s only because its flash is used as a memory tier that this non-performance limiting and even performance-boosting compression is possible: it can’t be done with SSDs.

Fusion-io needs to get app developers on board and using its PCIe flash rather than, for example, flash cards from LSI, Micron and others. Delivering APIs to make their software run faster on Fusion's flash should be an effective way of doing that.

Updated Zipline, George and Bungle: It's a Rainbow* of open-sourcing at Redmond