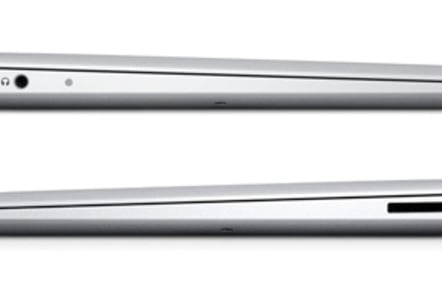 Boeing and Apple will work together to "weaponise" Apple technology, after the aerospace giant found aluminium-milling techniques developed by Apple to build the MacBook Air's case result in a stronger, more versatile aircraft wings than it is possible to create with its own manufacturing practices.

“One of my team dropped their MacBook air and its screen shattered,” Boeing's head of speculative engineering Rolf Apilo told The Reg. “We'd often remarked that the Air looked like the 'trailing edge' of a plane’s wing. That's the rear edge of the wing that, like the MacBook Air, tapers to a thin wedge.”

“Trailing edges must endure tremendous stresses including very high frequency vibration and rapidly changing temperature. So for a joke we decided to test the broken MacBook in one of our vibration units.”

“The MacBook scored a 4.1. That's a reading we'd never seen before, on any day.” Apilo said. “It was so good we bought some more dead MacBook Airs from eBay - there were SOOO many on sale you wouldn't believe it - cracked them open and tried to figure out what Apple does to make it so strong.”

“Whatever Apple does, its technology beyond anything we'd seen before,” Apilo said. “And we know a lot about aluminium.”

Apilo approached Apple to learn more but was turned away. “We got brushed off like a fanboi blogger asking when the iPhone 6 will be released,” Apilo said. But after informing Boeing executives of the test results, suit-to-suit communications resulted in meetings between the two companies.

“I wasn't in those meetings, but I'm told Jony Ive handed Tim Cook a $100 bill at the start: they had a bet this would happen one day,” Apilo said.

Apple had even prepared the outline of a joint venture that Apilo said will shortly be revealed.

The Reg has seen a draft of the press release announcing the deal. That document, dated April 1, says "This joint venture will explore potential weaponisation of Apple technologies".

“I discovered Apple had hired material scientists and metallurgists who once worked At Boeing, Airbus … even NASA,” Apilo said. “It looks like they've made some important breakthroughs that we look forward to taking to the world.”

An Apple spokesentity told The Reg the partnership will see Apple share intellectual property with Boeing, under licence. The joint venture will see some Apple staff temporarily seconded to Boeing.

Just when the partnership will bear fruit (pardon the pun) isn't known, but Apilo said the project to which the technology looks most applicable is a new weaponised drone.

“We're sure Steve Jobs himself would be thrilled to know that Apple technology will bring robotic justice from America to the world,” Apple's spokesentity said. "And if we can find a way to harden the MacBook Air motherboard so the leading edge capabilities of Mac OS X Mavericks can power the drone, our entire team will be even prouder." ®