CERN team uses GPUs to discover if antimatter falls up, not down

Einstein's General Relativity theory may be in for 'a big surprise'

Analysis of photographic-emulsion detectors has historically been conducted by humans, Ariga explained, because the human eye is far better at identifying the tracks produced by particles than have been analyses conducted by computers.

As the amount of data compiled by such detectors has increased, however, it has become necessary to use a series of particle-tracking algorithms to isolate tracks from background noise and identify their trajectories.

The first such work was done in the 1970s and 1980s, but the speed, efficiency, and quality of the automated detection was limited by the technology of the time. Early TTL-based systems could analyze scans of the emulsions at a speed of about 0.003 square centimeters per hour, Ariga explained, and current multi-CPU and FPGA-based systems have increased that throughput to between 20 to 50 square centimeters per hour. 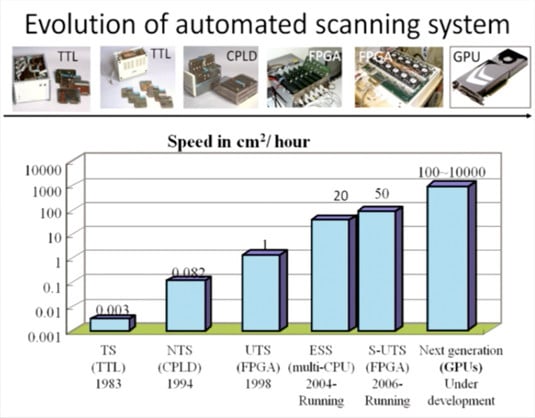 The amount of data produced by the antimatter-gravity experiments being conducted by the AEgIS Collaboration, however, will require far more processing power, which Ariga and his team achieve by employing GPUs.

"Next generation we are going to reach 100 or 10,000 square centimeters per hour with GPUs," he said, "depending on the parts."

The AEgIS scanning system currently produces 210MB per second of data, he said, and its next-generation system will produced data at a rate of 1.6GB per second. Turning all that data into information that will solve the antimatter gravitational puzzle will require far more power than CPUs alone can provide. 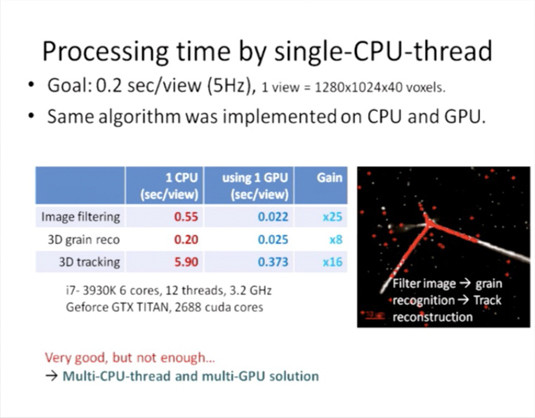 If you want to analyze 3D particle tracks, you're going to want a GPU

Fortunately, the team's work with a GPU-accelerated system has shown significant speed increases in the image-filtering, grain-recognition, and track-sensing components of the algorithm used by the team to analyze the data:

In testing their system, the team discovered that the most efficient algorithms use the CPU to find the "seed" of a particle track – the combination of any two nearby photographic-emulsion grains that may constitute a track, and then the GPU to count the number of grains in a candidate "seed" to determine whether it meets the minimum criteria of five or more grains along the same axis to be regarded as a true particle track. 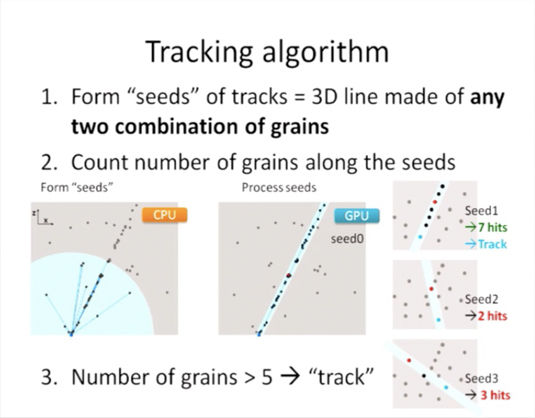 The AEgIS track-processing machine, as currently configured, contains a single water-cooled 3.2GHz, six-core, 12-thread Intel Core i7-3930K processor coupled with 16GB of DDR3 2400 memory, and three Nvidia GeForce GTX Titan GPU cards, each with 2688 CUDA cores and 6GB of memory and each capable of 4.5 TFLOPS, all powered by a 1250-Watt power supply.

Overall, Ariga said, the improvement from moving from a single-threaded CPU to the multi-threaded CPU, multi-GPU system that they have developed is on the order of 60X. "High-energy physics needs GPUs for the very heavy computation – experimental physics, and not just simulation," he said in summary.

Expect the results of the AEgIS Collaboration's search for the behavior of antimatter in a gravitational field in about a year or two, Agira said – but we can't help but think that replacing those year-old GTX Titans with three just-released 8TFLOPS GTX Titan Zs, and that two-and-a-half year old Core i7-3930K with, say, a few sockets full of Xeon E7 v2s might bring that day a little closer. ®