Watch your brain LIVE in 3D, then train your mind from inside it

Fly inside your own brain, play with its electrical system

These finding were published in an article in prestigious boffinary rag Nature last September, and Gazzaley and some of the Lucas Arts developers have formed a new company, Akili Interactive Labs, to create and market such therapeutic video games.

Their first offering, Project: EVO, is built on the Unity 3D mobile gaming engine, and is a tablet-based game with more-modern graphics and improved gameplay. 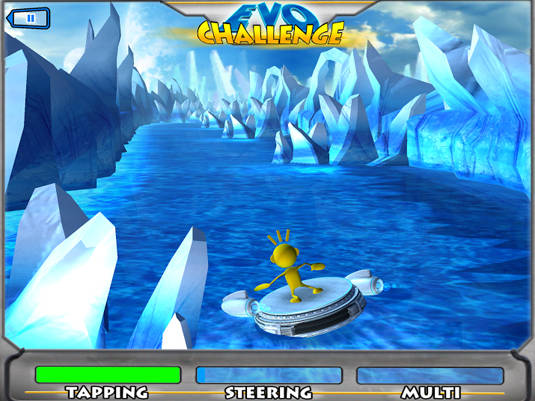 Project: EVO can save you from fading cognitive abilities, possibly help ADHD

But don't expect to buy Project: EVO on the iTunes Store or Google Play – at least not yet. "The goal is to see if it can go through an FDA pathway and essentially become the world's first prescribed video game," Gazzaley said.

That therapeutic possibility has caught the eyes and wallets of the pharmaceutical industry: Big Pharma giants Pfizer – which makes Aricept for Alzheimer's – and Shire Pharmaceuticals – which makes Adderall for attention-deficit hyperactivity disorder (ADHD) – are early investors in Akili Interactive Labs.

In addition to their investments, Pfizer is funding an investigation to determine if Project: EVO is effective as a "biomarker or cognitive endpoint for individuals at risk of developing Alzheimer's disease," and Shire is conducting a clinical study of the game's effectiveness at the other end of the age spectrum: children ages 8-to-12 with ADHD.

Gazzaley's lab is also working on new games and examining their effects on other cognitive disorders, including depression, dementia, autism, post-traumatic stress disorder, schizophrenia, and others. They're also investigating different platforms, including Microsoft Kinect and Oculus Rift.

But to determine not only the games' effect on cognitive functioning, but also to boost that effectiveness and develop feedback loops between the game and the gamer's brain, a combination of neurofeedback and neuromodulation mechanisms is needed, Gazzaley said.

To bring neural signals into a closed feedback loop, however, sensing and stimulation must operate in real time, he said – and that's why his talk wasn't being given at a meeting of the American Neurological Association, but at the GPU Technology Conference.

"This is really where CUDA-enabled processing and the GPU really comes in," Gazzaley told his audience of CUDA coders and GPU integrators. "It's a large problem: there's lots of independent sources in the brain that we're trying to localize, and in addition we're trying to do it fast – the closest we can get to zero latency."

The lower the latency, the more valuable the tool, not only to understand what the brain is doing in real time, but also to be able to both modify the game and stimulate specific areas in the brain in real time, at the moment when brain-operation data is received. 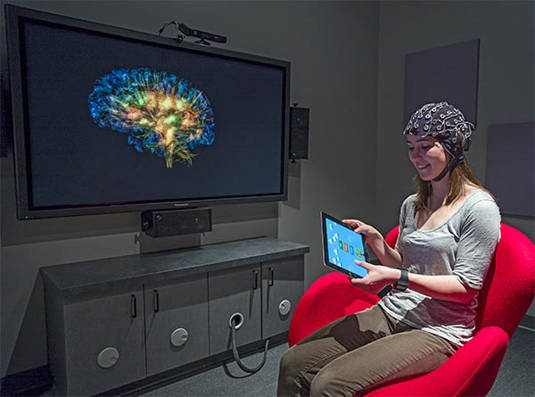 Inside the comfy confines of UCSF's Neuroscape Lab

To be able to visually observe brain activity in real time, the Neuroscape Lab of the University of California, San Francisco's Neuroscience Imaging Center (NIC) has developed what it calls GlassBrain, a Unity3D-based real-time model of activity in the brain of a subject wearing an EEG cap.

GlassBrain can display the real-time brain animation either on a flat-panel 3D display or through a virtual-reality setup such as the Oculus Rift. It maps the real-time data from the EEG cap onto a generic brain model, constructed from a 3D MRI scan, that contains both the brain's structure and its primary connection-fiber pathways. Thanks to the Unity3D game engine, you can fly through the live brain at will, piloting your way using a joystick or the sensors in a virtual-reality headset.

"One of the key features is this real-time EEG data that's really taking use of really sophisticated CUDA processing of the GPU on the Tesla card on our machine here," Gazzaley said. In real time, GlassBrain's CUDA code performs artifact rejection, environmental electrical interference rejection, and calculates predictions of activity on the brain's electrical pathways in response to the EEG signals, with different frequencies mapped to different colored lights traveling along the brain's fiber tracks.

In the show-stopper finale to his keynote, Gazzaley brought onstage Tim Mullen, a chief scientist of the GlassBrain project, and Mickey Hart, percussionist and former drummer of the Grateful Dead. Hart donned an EEG cap, and both strapped on Oculus Rift virtual-reality headsets.

Hart then played a new game that Gazzaley and his team are developing, NeuroDrummer, while Mullen navigated through Hart's brain in real time during his game play, which involved a broad range of MIDI-triggered rhythmic inputs; what they saw through their headsets was projected on a large screen behind them.

The effect was impressive, indeed – even to this rather jaded Reg hack – with Mullen being able to look up and down inside Hart's brain, zoom in and out of it, all while colored electrical impulses flowed about the brain's animated fibers.

However, even more impressive was the promise of future such setups in which the brain that was being observed would be the brain of the observer. "What would it be like to enter your own brain," Gazzaley proposed, "and play a video game in the [brain's] structure, in that area, having your challenge be to guide the neural processing that you're seeing, so that you could learn how to control how your brain processes information?"

What would it be like? Personally, I look forward to finding out – after all, your humble Reg reporter is hurtling headlong towards that older adult's 67 per cent "cost" rate.

How about you? If you're over 23, remember, you're already fading. ®