Watch your brain LIVE in 3D, then train your mind from inside it 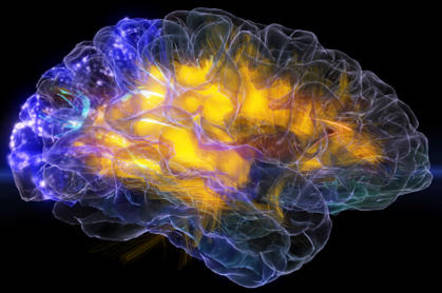 GTC As we age, our brains' cognitive abilities decrease. No surprise there. But one team of researches has experimental proof of a therapeutic technique that can reverse that decline: video games.

What's more, they've devised a way to directly stimulate your brain to improve its cognitive abilities, and created a 3D digital model, GlassBrain, into which a neurologist – and eventually you – can travel through your brain, and observe and control its inner workings in real time.

Not just any video game will improve cognitive abilities, mind you. The team has created video games specifically designed to challenge users by presenting them multiple streams of information in a distracting environment, a particularly difficult scenario for older adults.

The research was led by Adam Gazzaley, founding director of the Neuroscience Imaging Center at the University of California at San Francisco. Speaking at the GPU Technology Conference (GTC) in San José this week, Gazzaley said that he approached engineers at Lucas Arts five years ago to enlist their help in developing such a game.

"They told me they'd be delighted to work with us after spending their entire careers teaching teenagers how to kill aliens," Gazzaley said. "And I found that by supplying some sushi and beer you can get triple-A game developers, artists, and video-game programmers into your lab to work with your post-docs and students and actually create something really new."

By modern standards, the team's first effort, NeuroRacer, was a rather simple game. The game player was asked to use a joystick to steer a cartoon car over a winding road, and at the same time react as rapidly as possible to signs under which the car drove – but only some signs that had a particular shape or color on them.

In addition, the game was adaptive, Gazzaley said – it adjusted the challenge level as the player improved, "keeping you right in the sweet spot, which our game developers called the 'flow state'," and the reward levels were set so that both the driving and sign-identifying skills needed to improve in tandem before the player could level up.

The researchers then developed a version of the game that could be played while the user was in an MRI scanner or while wearing an electroencephalography cap, so that their brain's activity could be monitored while the game was in progress.

Being proper brain boffins, the team performed a battery of cognitive-assessment tests on each research subject – aged 68 to 80 – before their involvement in the research project. The test subjects were then given a laptop with the game installed, and asked to play it for a month, one hour a day, three days a week.

The team had baseline data which showed that the cognitive "loss" induced by the distracting signs in the driving game gradually and nearly linearly increased from 27 per cent in 20-year-olds to 63 per cent in 70-year-olds. "Are there any 23-year-olds in the audience today?" Gazzaley asked the keynote crowd. "If you are, this is the top of your cognitive pyramid – you should really go out and treasure today. It's as good as it's going to get."

That may be true, but the experimental data produced by Gazzaley's team showed that the cognitive decline experienced during aging is reversible. Data from a 64-channel EEG cap worn by the test subjects showed that after the month of game-playing, the test subjects' theta brainwaves – associated with activities involving attention, cognitive control, and working memory – improved to a level exceeding that of the 20-year-olds' baseline results.

"We also found that skills that were not trained in the game – we're not part of the game at all – also improved," Gazzaley said. "So their working memory ability, the ability to hold a face in mind for a short period of time, or their vigilance to a very boring target that appears rarely also improved."

Next page: Fly inside your own brain, play with its electrical system
Page:
Tips and corrections
13 Comments