iFixit boss: Apple has 'done everything it can to put repair guys out of business' 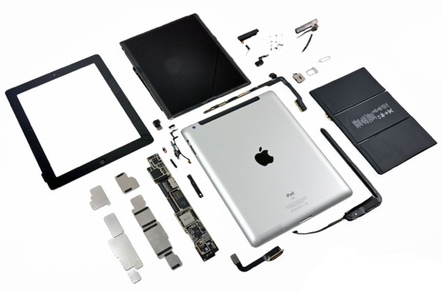 Fixing and upgrading iOS devices can be a rewarding business opportunity, so long as you don't mind having to fight Apple every step of the way.

So says the founder of iFixit, who spoke at the MacWorld Expo in San Francisco on Thursday. The repair outfit's CEO Kyle Wiens said there is little or no official public information for servicing the handheld gizmos: everything his company does, from its famous tear downs of new hardware to the manuals and how-to guides it publishes, are put together without any more access to Apple than is enjoyed by the average person on the street.

Wiens said he flies staff to Australia to get their hands on new hardware as early as possible to tear-down and review before folks in the US wake up hungry for the latest coverage. His repairs team also combs through the inventories of third-party resellers to obtain replacement parts and spare components that Apple does not offer.

He said that not only does Apple make fixing its fiddly electronics extremely difficult, but doing so with the blessing of the company is practically impossible: Apple's authorized technician certification apparently only applies to Mac computers, rather than iThings, and even that qualification is becoming more difficult to obtain.

"They [Apple] have done everything they can to put these guys [third-party repairers] out of business," claimed Wiens.

It is no secret that Apple is keen to keep all repair and service operations in-house, rather than let any third parties get a slice of the action. The company advises users to take their products to the Genius Bars in Apple Stores to arrange repairs or a swap for new working hardware. And Heaven help you if you've jailbroken your gadget – you're probably on your own after that.

But, Wiens pointed, not everyone lives near an Apple Store nor can everyone book Genius Bar appointments at convenient times. All this while third-party repair partners are discouraged from setting up shop to help people out, he said.

We asked Apple for comment, but true to form, Cupertino hasn't offered us anything in the way of a response.

In the meantime, Wiens said his company is hoping to fill the void by developing a set of kits and services for those brave enough to want to start their own repair businesses. He noted that while obtaining information and parts for repairs may be difficult, opportunities for entrepreneurs are out there.

It wasn't all Apple bashing, though: Wiens noted that his company's all-time least repairable fondleslab remains the Microsoft Surface Pro.

"I would not be excited about getting into the Surface Pro repair business," Wiens mused.

"iPads are difficult to disassemble on purpose, the Surface Pro is impossible to take apart because Microsoft is incompetent." ®

Apple has just got back to The Reg, but simply pointed your correspondent to its Authorized Service Provider Program. "We don’t have anything more to add beyond what’s provided here," the spokesperson added. "Sorry."