Anyone can download it – we did, and it's all there 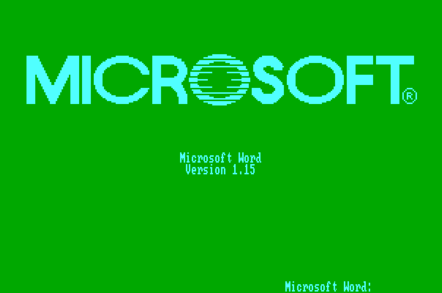 Retro-computing fans got a treat on Tuesday when Microsoft donated the source code of MS DOS 1.1 and 2 to the Computer History Museum (CHM), along with the first version of Word for Windows.

"Version 1.1 fits an entire operating system – limited as it was – into only 12KB of memory, which is tiny compared to today's software," said Len Shustek, CHM chairman. "We think preserving historic source code like these two programs is key to understanding how software has evolved from primitive roots to become a crucial part of our civilization."

The code isn't being open sourced – that would be a step too far for Redmond – but is available under a research license. The code can be downloaded here for MS DOS and here for Word for Windows but not distributed further under the terms of the license. The museum's servers were struggling at time of writing.

MS DOS was famously something of a kludge. Microsoft signed a deal with IBM to provide an operating system for Big Blue's first PC and, because it didn't have an OS, paid Seattle Computer Company $75,000 for its Q-DOS (Quick and dirty operating system) in 1981 and rebadged it as PC DOS for IBM and MS DOS for everyone else.

Two years later Microsoft released MS DOS 2.0, rewriting it to allow support for hard drives of up to 10MB and restructuring the file system. Sadly it was known for being buggy and began a history of even-numbered versions of Microsoft's DOS operating systems being poorly received by the developer community – a trend it finally broke with the sixth version of the operating system.

Microsoft's Word for Windows package was released in 1989 and exploded in popularity. The word processor started life in 1983 as Multi-Tool Word based on a word processor called Bravo created at Xerox's legendary PARC development center by Charles Simonyi. Gates hired Simonyi to build a version for Redmond and the resulting software went on to bury established players like WordPerfect through a combination of user-friendly features and Microsoft's massive clout in the industry.

"By contributing these source codes to the Computer History Museum archives, Microsoft is making these historic systems from the early era of personal computing available to the community for historical and technical scholarship." ®