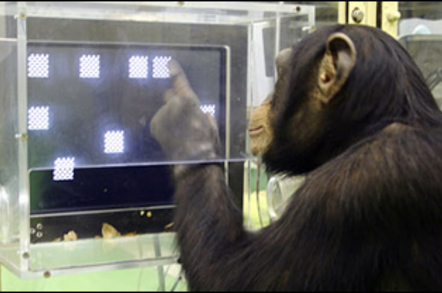 Whatever Apple's up to with its strongly-hinted-at new products, investors will be hoping it's not aiming at the simian market after a monkey reportedly lost interest in an iPod touch after just a few minutes.

The iPod Touch in question was dropped by ten year-old Stormi-Lee Whitford during a visit to Auckland Zoo, according to The New Zealand Herald. A Spider Monkey Stormi-Lee was photographing at the time swooped on the device, and played with it for a while “to the amusement of children watching on.”

The fun didn't last because the monkeys didn't hand back the iPod, which at $NZ300 ($US256 or £155) was a rather generous combined birthday and Christmas present.

The iPod's not been seen for a few days with zookeepers telling the Herald they suspect it's been tossed into the moat surrounding the monkey enclosure.

We'll leave it to you, dear readers, to decide just which species is the higher primate given humans are so engrossed by iDevices but monkeys toss them aside after minutes. ®

Monkey selfie case settles for a quarter of future royalties