ROBO-SNOWDEN: Iraq, the internet – two places the US govt invaded that weren't a threat 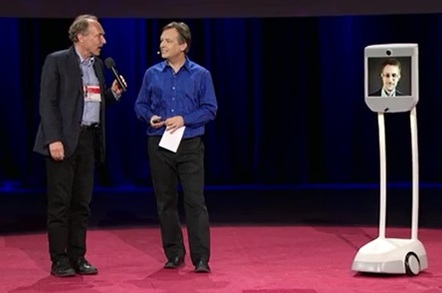 Pics Whistleblower Edward Snowden has appeared on stage at a TED conference in Canada via a remote-controlled robotic screen – and was hailed as a hero by the Web's founding father Sir Tim Berners-Lee. 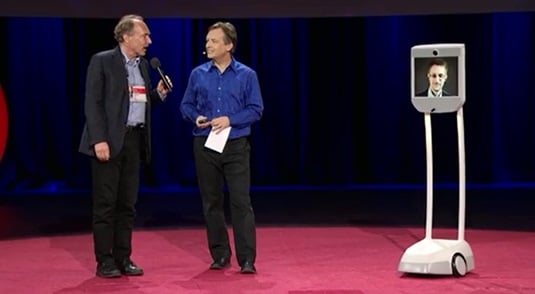 Father of the web meets one of its sons ... Berners-Lee, far left, and right, the Robo-Snowden

"I grew up not just thinking about the internet but in the internet, and while I never thought I'd grow up to defend it in such a direct and practical manner, I think there's something poetic about one of the sons of the internet has become close to the internet as a result of political expression," Snowden told Sir Tim on stage.

"I believe a Magna Carta for the internet is exactly what we need. We need to encode our values not just in writing but in the structure of the internet." 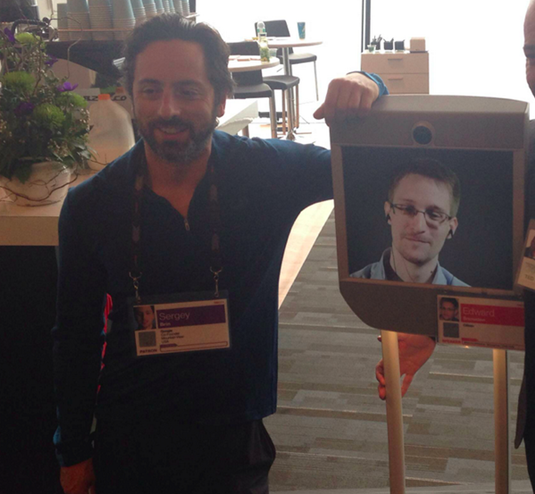 Snowden was speaking from an undisclosed location in Russia via his robotic avatar, and was able to move around the stage checking out the audience via an attached camera during his presentation. The connection wasn't perfect, with Sir Tim jokingly suggesting the NSA was trying to block the transmission.

The ex-NSA technician then took questions on his actions so far and what was still left to be leaked from the cache of documents he swiped from the intelligence agency's network and handed to select journalists to publish.

"There are absolutely more revelations to come," Snowden said. "I don’t think there's any question that some of the most important reporting to be done is yet to come."

Snowden said the US and UK's online mass-surveillance program dubbed PRISM had allowed the NSA to deputize corporate America to deliver innocent citizens' private data into the hands of spies, and not just the metadata. Some companies had fought against such a move, but all had eventually kowtowed.

The NSA had also put the entire American economy at risk by weakening cryptographic standards to allow them to be broken. The project, called BULLRUN by the NSA and EDGEHILL by the British spies at GCHQ (named after the first battle in both countries' respective civil wars) meant that anyone with sufficient resources could crack the encryption and destroy the value of intellectual property.

The US agency had lied to Congress over its capabilities, Snowden claimed, and had also broken its own internal rules with some of its eavesdropping activities. He denied setting out to harm America, his home country, and was dismissive of criticisms of his actions by former Vice President Dick Cheney, who described Snowden as a traitor.

"Dick Cheney is really something else," Snowden said with a grin. "The prerogatives of people like Dick Cheney do not keep the nation safe. The public interest is not always the same as the national interest. Going to war with people who are not our enemy in places that are not a threat, doesn't make us safe, and that applies in Iraq and on the internet."

Snowden said that there was no evidence that the mass surveillance schemes set up by the NSA had done anything to catch terrorists. Indeed, he said that in the intelligence community the threat of terrorism was called a "cover for action," something to trigger an emotional response that can be used to get powers that would otherwise be unavailable.

As for the personal attacks and threats made on Snowden's life, the fugitive said that they didn’t worry him. He was there to do a job for the American people irrespective of his personal condition.

"Who I am really doesn’t matter. Even if I'm the worst person in the world, you can hate me and move on," he said. "What really matters are the issues. What matters is the kind of government we want, the kind of internet we want, and the kind of relationship between people and society and that's what I'm hoping the debate will move towards." ®