The Doomsday scenario we should have been worrying about 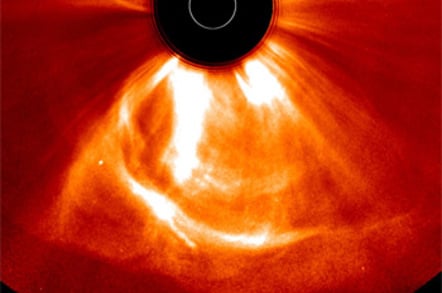 Video A new analysis of data from NASA's Solar TErrestrial RElations Observatory (STEREO) by Chinese and Berkeley helioboffins shows that a July 2012 solar storm of unprecedented size would have wiped out global electronic systems if it had occurred just nine days earlier.

"Had it hit Earth, it probably would have been like the big one in 1859, but the effect today, with our modern technologies, would have been tremendous," said UC Berkeley research physicist Janet Luhmann.

The 1859 storm, also known as the Carrington Event, after the British astronomer who recorded it, swept over the Earth at the end of August and is the largest recorded solar storm in history. The aurora borealis extended as far south as Cuba and telegraph systems burnt out across Europe and the US, in some cases shocking operators and continuing to send signals even when switched off.

The data from STEREO's twin satellites observing the Sun showed that on July 23, 2012, an enormous coronal mass ejection (CME) burst out of the Sun's side at between 1,800 and 2,200 miles per second. STEREO-A, situated 89,000,000 miles away from the Sun, logged the CME's speed at 750 miles per second when it physically passed the probe on its way spacewards.

"We measure magnetic fields in 'Tesla' and this CME was 80 nanoTesla," said Antti Pulkkinen, a space weather scientist at NASA Goddard. He explained that the Carrington Event was measured at 110 nanoTesla, but the 2012 eruption is the largest ever detected by the STEREO mission.

Given the Sun's rotational speed, if the CME had erupted nine days earlier the Earth would have been directly in its path. Once it reached our planet it would have taken out satellite communications systems, a big chunk of the GPS network, and possibly crashed power grids and computer systems down on the surface.

"The cost of an extreme space weather event, if it hits Earth, could reach trillions of dollars with a potential recovery time of 4 to 10 years. Therefore, it is paramount to the security and economic interest of the modern society to understand solar superstorms."

The Sino-American team has published their full results in the journal Nature Communications. ®