WTF is … the multiverse? 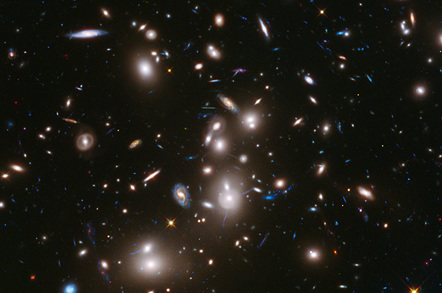 Along with the general excitement surrounding the announcement that astrophysicists may have found a way to confirm the “cosmic inflation” model of the early universe came a keen sub-debate: does this result imply we live in just one universe of a so-called “multiverse”.

The Register doesn't have the requisite competency in physics to judge the veracity of multiverse theories, but we did have a conversation with ANU astrophysicist Dr Brad Tucker. We attempted to rack Dr Tucker's brains to try to answer two questions: can cosmic inflation imply a multiverse, and if so, why?

In asking the question, and in answering it, both El Reg and Tucker respectively acknowledge that there's still deep scepticism about multiverse models – but it's probably easier to watch the science unfold if you understand why multiverse models have been put forward in the first place.

What the BICEP2 experiment discovered is a polarisation – primordial B-mode polarisation – that it believes demonstrates the existence of an inflationary period in the universe. This inflation was predicted and explored by luminaries such as Alan Guth and Andrei Linde back in the 1980s.

If the BICEP2 results are correct – remembering that they're still to go through peer review – they would constitute the best observational evidence so far to support the inflationary model.

The reason BICEP2 implies inflation is that the polarisation is present fairly uniformly across the whole of the cosmic background radiation. In other words: whatever caused the polarisation represents sufficient energy to make the mathematics of cosmic inflation stack up.

And it was a tweet of a comment by Linde – that “If inflation is there, then the multiverse is there” – that captured The Register's interest.

As Dr Tucker explained, in the “generic inflation” model, in order to create enough energy and space for our universe to undergo that inflationary period, “you imply an infinite amount of energy and space.”

Even though our universe is big, “an infinite amount” of energy and space leaves a lot left over to be explained.

Hence the multiverse hypothesis: it balances the scales. The inflationary period, followed by a gravitational collapse into the universe we can observe, gives us the 13.8 billion years of universe history we can observe – leaving the excess energy and space beyond the reach of we inside the bubble.

“To get inflation, you have to have a vast amount of vacuum energy,” Dr Tucker explained.

He explained that the vastness of astrophysics intersects with the tiny world of particle physics – because it's in the quantum world that vacuum energy was posited and, via our observations of quantum noise, is measured.

Here's a vastly over-simplified thought experiment: if you took a cubic metre of dead vacuum and watched it for long enough, with sufficient sensitivity, you would eventually see pairs of particles and anti-particles (same mass, opposite charge) spontaneously pop into existence and annihilate each other, leaving behind a brief flash of energy.

As has been discussed before in El Reg, this has been observed. But there's nowhere near enough vacuum energy to account for cosmic inflation – at least, not in the universe we can see and measure.

Between the vacuum energy we know about and the amount needed to drive inflation throughout the early universe, Dr Tucker says, "the scales are off by a hundred orders of magnitude".

A cynical view of the multiverse might be that it's simply a way to balance the books of the universe, to give it enough vacuum energy to drive the cosmic inflation that the BICEP2 has just demonstrated.

“If inflation exists, the vacuum energy is contained on a larger scale than in our 'own' universe,” Dr Tucker explained.

About that, “there's a lot of debate,” Tucker said.

“What's exciting is that we're just taking the first footsteps. Does this result imply that the excess energy can be found somewhere, or does it just tell us we still don't quite understand inflation?” ®