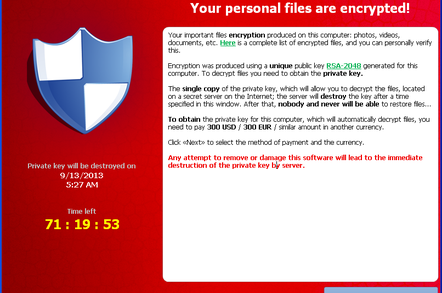 Marcel Datcu, 36, from the village of Movila Miresii, hanged himself while holding his four-year-old son in his arms with a rope around his neck. Both perished. Another of the man's sons discovered the shocking scene.

The prosecutor told the paper the man had left a suicide note to his wife. Braila24 quotes "sources close to the investigation" as claiming that he had written of his despair about his inability to pay a massive fine after his computer became infected by a strain of ransomware. According to the paper's sources, he explained in the note that he'd received a ransomware-generated warning that he would either have to pay a 70,000 lei (about $21,600, £13,000) fine or go to prison for 11 years.

Softpedia reports that the “police” ransomware infected his computer after he visited pornographic websites. Strains of malware of this type normally request only $200-$300.

Ransomware is a type of malware that can infect computers through spam emails or malicious websites before demanding payment to unlock the devices. The notorious CryptoLocker ransomware takes the scam one step further by encrypting the content of compromised devices. Normal ransomware can be removed like most computer viruses but CryptoLocker victims will lose their files unless they either have a recent, clean backup or they pay for an unlock code.

A strain of police ransomware called IcePol has claimed several victims in Romania.

Romanian security software firm Bitdefender worked closely with Romanian police and discovered that cyber-criminals made almost $160,000 in a single year from an IcePol server in Romania. The cybercrime infrastructure was the target of a take-down operation last month.

"While most of the ransom money was paid by US-based users (over $32,000), a significant percentage was also gathered from Romanian PCs ($2,500)," a blog post by BitDefender on IcePol and the tragic Datcu case explains.

"The IcePol Trojan capitalizes on people’s fear, scans their IP address and delivers a fake Police message in their native language. Phony accusations range from zoophilia and child pornography to copyright infringement," it adds. ®