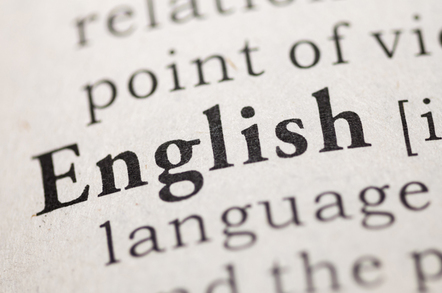 The Oxford English Dictionary has announced the latest tranche of terms to be admitted to its hallowed pages, including some c-words so strong that neither we nor the Daily Mail dare utter them before a family readership.

Among the adjectives on offer are "demobilized", "ethnopharmacological", "honking", "quadrupla", "sciency" and "wackadoo", while newbie verbs are represented by "Blu-Tack", "bookend", "heroine-worship", "scintiscan" and "scissor-kick".

Those in need of an IT angle need look no further than "E ticket" and the phrase "mobile device", the latter "skyrocketing in use in recent years and taking on a specific meaning, denoting any mobile phone or portable computing device", according to the OED's US dictionaries head honchette Katherine Connor Martin.

Martin takes a closer look here at other fresh faces with a decidedly transatlantic twang, including "crap shoot", in the sense of a risky enterprise, "do-over" ("do something again after an unsatisfactory first attempt"), and "down-ballot" ("used to describe the less prominent contested offices listed nearer the bottom of the ballot").

A couple of other inclusions which caught El Reg's eye are the bastard spawn of the Strategy Boutique "empowered", and "death spiral", which is doubtless a term the linguistic guardians of Middle England would use to describe the trajectory of our beloved mother tongue.

Regarding shock invective beginning with "cu-", we refer readers of robust sensibilities to the full list. ®

'Aaaah FFS, 'amazeballs' has made it into the Oxford English Dictionary

QuoTW Plus: 'EE, how shocking, another problem I face with your service'

Read it and weep