Behold, the TITCHY T-REX that prowled the warm Arctic of long ago

Runty monster was a paltry 25 feet long, got sand kicked in face by other dinos 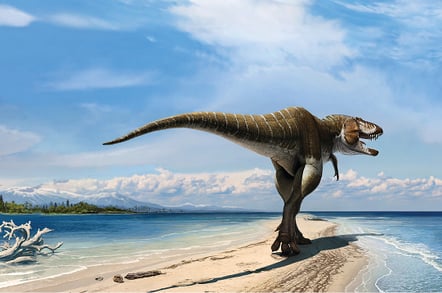 Paleontologists have discovered the head of a new pigmy breed of Tyrannosaurus rex that roamed the Arctic more than 70 million years ago.

The remains of Nanuqsaurus hoglundi, or polar bear lizard, were dug up in 2006, but it is only now that a team from the Perot Museum of Nature and Science in Texas has managed to identify it as a new species.

"The 'pygmy tyrannosaur' alone is really cool because it tells us something about what the environment was like in the ancient Arctic," said Anthony Fiorillo, who co-authored a paper in PLOS One on the new find.

"But what makes this discovery even more exciting is that Nanuqsaurus hoglundi also tells us about the biological richness of the ancient polar world during a time when the Earth was very warm compared to today."

Calling Nanuqsaurus hoglundi a pigmy is a bit of an understatement, however. The dinosaur was about 25 feet long and weighed 1,000lb, compared to its larger, sub-tropic cousin that averaged around 40 feet long and four tons.

At first it was thought that the find was a juvenile T-Rex, but the bone formation indicated that the dinosaur was fully mature at the time of its death. The paleontologists posit that the diminutive dino evolved to suit the unusual meteorological conditions in the Arctic and the effects of Foster's rule, which states that limited geographies like islands have major effects on animal development.

Back when Nanuqsaurus hoglundi roamed the Arctic, the temperatures were much warmer than today, but there are long periods of darkness during the winter months, due to the northern latitude, which would have suited a smaller animal.

Foster's rule comes into play because the area where the dinosaur was found was a small section of land cut off from the wider continent by a large mountain range, meaning the tyrannosaur breed had a lot less choice of what to chomp.

"The North Slope was isolated by the Brooks Range, and with it being dark half the year, there probably wasn't a lot of food up there. Over time it would have become more advantageous for the Nanuqsaurus hoglundi to have a smaller body size," the study [PDF] states.

Foster's rule certainly throws up some biological oddities. For example, wooly mammoths trapped on Wrangel Island off the north coast of Russia by rising sea levels shrunk down to the size of large cows before becoming extinct about 4,000 years ago.

The team has now returned to the quarry where the titchy T-Rex fossil was found and extracted another six tons of rock, which will be carefully taken apart to see if more evidence of the Arctic predator can be found.

"We're at the tip of the iceberg, to use a pun, as far as our exploration goes of the polar region," said Fiorillo. "There's still a lot of work to do, and that's something to which we very much look forward." ®