Is the World Wide Web for luvvies and VCs – or for all of us?

Part 1: In which we look at what the Greatest Living Briton got wrong (and right)

And now for the Good News. It's even worse than you thought

The positive side of Berners-Lee's hack is that the web has evolved to support new kinds of publishers and publishing formats. You can wrap angle brackets round anything, and a browser will be able to read it. Twitter is today's easy-to-use IRC channel. Facebook is what email became. 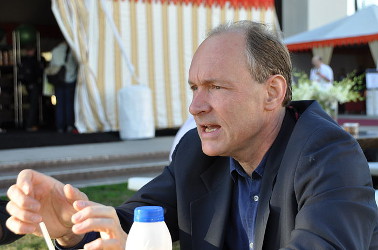 Yet these are proprietary systems that move at the pace of their slowest developers. For all their talk of being “platforms”, they guard access to participation quite jealously. To knit them together in a way that's useful for you - using something like IFTTT - is also clumsy and obtuse.

Many of us naively once assumed that innovation would "sediment down" to become an open internet protocol, and innovation would be on the client side. So Twitter today should be an open RFC protocol - and IFTT a simple well defined macro language. (ISPs once bundled such basic services with their accounts). Clever developers would outdo each other to produce nicer and smarter client software that used these protocols. It hasn't happened. Instead, all the investment and speculation goes to server companies. The VCs bet each time on creating a new corporate fiefdom.

When someone lauds the "innovation of the web", or its "openness" just point out they're fetishising not just a specific technology, but a very particular way (or bias) in directing capital. Try pointing out how much more innovation there could be. Try it for the hell of it - I bet the reaction will be as if you swore in church.

Now if all this sounds churlish and begrudging - it isn't meant to be. It is intended as a reminder that we need to be much more ambitious what we demand from technologists, so they're more ambitious and thoughtful about what they do. If we simply gawp in slack-jawed wonder, as people tend to do on tech anniversaries, then the technology won't be as good as it could be. Or should be.

Berners-Lee must surely regret not doing a better job between 1989 and 1993, given his subsequent emphasis on semantics. Yet gawping seems to be the default mode of media luvvies. The fact the web's 25th anniversary follows only three years after its 20th also suggests a pathological need to gawp and clap - and avoid the difficult questions.

Media luvvies also tend to conflate the web with the internet. The evolution of the internet has its own problems, all of which are fixable one way or another. Some of these problems stem from the web-centric way of doing business; that is, the political structure of the economy that the web and its VCs created, which we keep being told is inviolate and sacred. Alas, Tim Berners-Lee subscribes so narrowly to this view, he isn't going to be much help. His solutions will make the individual more powerless.

What we really need isn't another Magna Carta for the web companies but more of a trade union for us, the people who make and use the web. But I'll address that in Part 2.

Happy Birthday Web, however old you are. ®