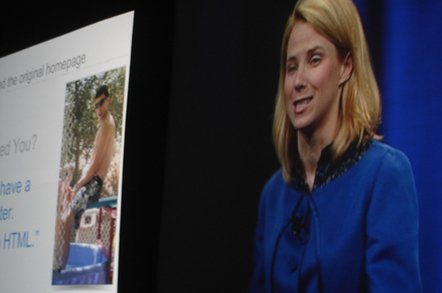 Yahoo! doesn't want to play nice with Google and Facebook anymore. The result: the pair of competing free-content ad networks will be booted off Yahoo!'s turf.

The purple-tinged web giant plans to stop its users from logging into sites such Flickr, Fantasy Sports and other Yahoo!-owned stuff using their Google and Facebook IDs.

The Marissa Meyer-run Yahoo! said it was doing this to improve the "user experience". But – for those in need of a translation – Yahoo! actually wants to do the same thing as its rivals: slurp up more targeted data to satisfy admen by offering services that are neatly tied to identity credentials.

The Purple Palace floated the same conceit regularly bandied around by the likes of Google and Facebook, stating that the move to fade out its foes "will allow us to offer the best personalised experience to everyone".

But one-time Googler Mayer's strategy to try to grab more ad dollars is happening slowly, with Yahoo! declining to say when it will fully shift over to only allowing its own sign-in IDs on all of its services.

Its Tourney Pick'Em Fantasy Sports basketball game was the first to cock-block Google and Facebook on Monday, as spotted by Betanews. ®