And get a load of our gleaming voice system! It's, erm, 2G actually 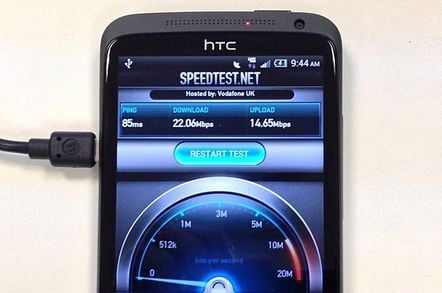 Olaf Swantee, the CEO of EE, says that his network is planning a scorching 300Mb/s upgrade to its London coverage using the LTE-A (LTE-Advanced) specification. This will roll out in South London first and then to cover the whole of the area within the M25.

While Swantee claims that this will make London the place with the fastest mobile connection, EE will be following in the footsteps of SK Telecom and LG U Plus - both of whom have three-carrier LTE-A in South Korea.

The revelation came as part of an interview given to trade body GSMA's news site Mobile World Live. In the interview, Swantee also said that voice is still important to EE.

"Network differentiation is not possible without voice, do not treat voice as a commodity," he said, adding that EE is now spending £279m on voice, upgrading 2G equipment.

It's worth noting here that Andy Sutton, EE's principal network architect, has recently said that he expecta EE to switch off 3G before 2G.

Swantee however refused to tie LTE and voice improvements together,and wasn't prepared to say anything on Voice-over-LTE, claiming that because EE was running 2G and 4G at the same frequency the ability to fall back in a mere 2 seconds made the need to support VoLTE less important.

This could be seen another way: all voice has to go over 2G or 3G because it takes two seconds to fall back and that would be unacceptable in a voice call. VoLTE makes more sense where coverage is less like a military academy* and then don't have to fall back.

Support for LTE-A is growing with a number of devices shipping - notably a Korean market variant of the Samsung Galaxy S4 - and of course it's rumoured for the next iteration of the iPhone, but then pretty much everything gets rumoured for iPhones. ®

* Bits of it keep passing out (hat-tip to the late, great Douglas Adams for the little quip, sourced from Hitchhiker's Guide to the Galaxy, which reads as follows: Ford Prefect: How are you feeling? Arthur Dent: Like a military academy. Bits of me keep passing out.)