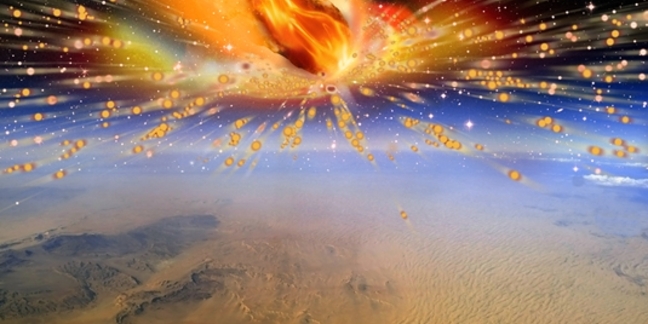 Comets may not be the product of the Sun exerting its influence over rocks in the Oort Cloud, but may instead be pushed Earth-wards by dark matter.

So say Lisa Randall and Matthew Reece from Harvard's Department of Physics, in a paper titled “Dark Matter as a Trigger for Periodic Comet Impacts”.

The pair write that “Large meteorite strikes on Earth cause big impact craters that are very likely responsible for some mass extinctions” and note that clusters of such collisions come along about every 35 million years. They therefore ponder where those space rocks come from. After dismissing the “Nemesis” theory (the Sun has a dark, invisible, companion) they wonder if the Solar System's path through the Galaxy sometimes intersects with denser-than-usual regions of space, which give Oort Cloud rocks a nudge towards the Sun.

That theory, they write, is hard to sustain because we've not been able to find denser or more energetic regions in space.

But what if those regions are out there, but are Dark Matter, the hypothetical stuff we can't see but which should probably be there in order for our models of reality to work?

The paper then heads off into what we could expect to find if Dark Matter is distributed through the Galactic Plane in similar ways to conventional matter. If the dark stuff behaves the same way as observable matter, the pair reason, it could well be that the Solar System occasionally passes through regions where there's enough Dark Matter to disturb Oort Cloud rocks and send them our way. And seeing as our Solar System orbits the galactic core, it makes sense that we would pass through such regions regularly enough to match observed large space rock impacts here on Earth.

The paper concludes that there's not enough data on the disposition of space to make this more than “a fascinating possibility worthy of further exploration."

Try telling that to the dinosaurs. ®

We dunno what's more wild: This vid of Japan's probe bouncing off an asteroid to collect a sample – or that the rock was sun-burnt