Thanks a lot, Facebook: Microsoft turns Office 365 into social network

In Redmond, no one lets you unfriend your boss 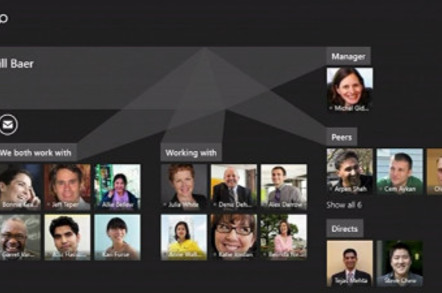 If you're avoiding friending your manager on Facebook or Twitter, the net is tightening: Microsoft has stitched new social network-like features into all of its productivity products.

In a keynote speech today at the company's Sharepoint conference, Microsoft corporate vice-president Jeff Teper ushered in "the transformation of Office" by revealing three big additions to the set of software: Office Graph; a customized activity feed codenamed "Oslo"; and a set of "next-generation portals."

Love them or hate them (committed Reg readers probably fall into the latter category), the success of social networks like Twitter and Facebook has caused a rethink in how software is designed. Salesforce fell prey to this with an abortive app named Chatter and a subsequent redesign, and now Microsoft has decided to inject some neo-Zuck aesthetics into its productivity apps.

These new capabilities are the clearest sign yet that Microsoft is following through on its promise last summer to use some of the tech it acquired with its Yammer buy to "weave social into the work people do every day, combining it with collaboration, email, instant messaging, voice, video and line-of-business applications."

These new apps have been designed to closely fit the much-maligned touchscreen-friendly Metro interface found on Windows 8. But the changes go beyond the superficial: the new Office Graph will become "the underlying substrate... across Sharepoint, Exchange, Yammer [and] custom applications," Teper exclaimed.

Office Graph will link an individual's identity and permissions across multiple Microsoft apps, and will build on various existing social features in all of them. It ties people within an organization together in a similar way to how Active Directory lets admins bind up application and user data.

The capabilities of Office Graph give rise to one of Microsoft's biggest new features: Oslo (actual name to be announced at a later date). 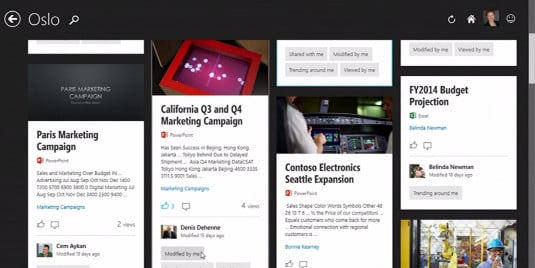 Oslo is a new application that displays an endless Facebook-like newsfeed of objects being worked on within an organization. Users can filter Oslo via criteria like "presented to me," "shared with me," "modified by me," and "trending around me." ("Trending" is based on some multi-variant ranking algorithms that susses out what everyone else within an organization and its sub-groups are talking about.)

Oslo wraps in its own potted social profiles, which are pulled from the Office Graph and also show up in a separate new featured named "Groups."

Versions of Oslo will eventually be available for Windows 8.x, the web, and mobile devices, beginning in the second half of calendar year 2014.

Redmond also announced a bevy of new APIs to support these capabilities, helping developers better link applications with Microsoft's OneDrive storage technology, and helping them deal with some of the expanded "People" functions as well.

Microsoft also showed off an "Office 365 Video Portal", which uses some of the media services components of Windows Azure to let organizations upload, store, and find videos "in a secure manner," while also handling compression, optimization, and rendering work, as well.

"Today, the world has become a giant network where connections make information more relevant and people more productive," Teper said in a canned statement. "Most companies, however, are not working like a network, which we believe is vital for their ability to improve collaboration and respond to customers, competition and market changes."