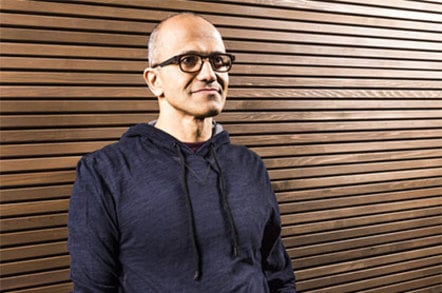 Reports have emerged of new senior appointments at Microsoft, events that are being interpreted as new CEO Satya Nadella putting his stamp on the organisation.

According to Re/Code and Bloomberg, Mark Penn will soon be confirmed as chief strategy officer.

Here's what Microsoft's biography of Penn says about the man:

“Mark Penn is executive vice president of the Advertising and Strategy group, responsible for Microsoft’s global advertising and marketing strategy. He also oversees a multidisciplinary SWAT team that deals with a range of projects involving marketing, media and compete. His group’s goals include creating world-class advertising and messaging to consumers and business customers delivered through the most cost-effective and scientific means available. Based on state-of-the-art research and data tools, the campaigns aim to inspire our customers, incite our fans and turn around doubters.”

“Previously,” the biography goes on, “Penn was worldwide CEO of Burson-Marsteller and CEO of Penn Schoen Berland, serving as senior adviser to global corporate and political leaders including Bill Gates, Bill Ford, UK Prime Minister Tony Blair, Israeli Prime Minister Menachem Begin, Senator Hillary Rodham Clinton and President Bill Clinton.” So, a part of the family with amazing connections. If Bates has indeed been made head of strategy, it's a new type of strategy for Microsoft. Craig Mundie served as chief research and strategy officer with a focus on Microsoft Research. Eric Rudder is currently “executive vice president of Advanced Strategy” a role in which he is “responsible for cross-company technology initiatives for all Microsoft devices and services.”

Microsoft's bio for Bates points out he also has some strategic role, as it says his gig as “executive vice president of Microsoft’s Business Development and Evangelism group” means he is “responsible for the company's relationships with key OEMs, strategic innovation partners, independent software vendors and developers. He also leads Microsoft’s corporate strategy team.”

Penn is known to be the mastermind behind Microsoft's “Scroogled” anti-Google campaign, so perhaps he gets to continue in that attack dog vein and Microsoft wants a more aggressive communications style and/or strategy.

Tami Reller became Microsoft's point person for Windows 8, a role in which she often released statistics that showed the operating system was doing great if you squinted at it in just the right way. If reports of her demise are correct it perhaps signals Microsoft distancing itself further from those who made the world so tepidly enthusiastic about Windows 8. ®