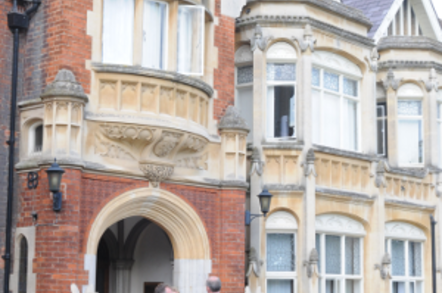 The National Museum of Computing has called for an independent review in a bid to solve a long-running dispute with the Bletchley Park Trust - chaired by ex-MI6 chief (or "C") Sir John Scarlett, famous for overseeing production of the dossier which took Britain to war in Iraq.

Tim Reynolds, chairman of the TNMOC trustees, has written to the Trust to inform them of his plan to call in outside organisations to help solve the squabble.

The two organisations are locked in conflict over the Trust's refusal to allow admission to TNMOC to be included in the ticket price for the main Bletchley Park museum, which is operated by the trust.

A number of volunteers have defected from the Trust to TNMOC after an elderly volunteer was apparently "sacked" for showing a Bletchley tour group around the computing museum.

The Trust has erected a fence separating the two organisations, which Andrew Spencer, corporate events and groups manager at The National Museum of Computing described as being like the "Berlin Wall".

As the home of the World War II codebreakers, Bletchley Park played a pivotal role in Britain's computing history. Many of the most important code-cracking machines - such as the German Lorenz cipher machine and Blighty's famous Colossus - are kept in Block H, which is now home to TNMOC.

However, since the Trust took on a new CEO in early 2012, Iain Standen, relations have worsened.

Sources within TNMOC told us that the Trust bosses were "difficult children" set on turning Bletchley into a "Disneyland" style attraction, rather than a living, breathing centre celebrating its rich computing heritage.

Both Standen and the Bletchley Park Trust's chairman, Sir John Scarlett – formerly head of the Secret Intelligence Service – are also said to be vociferously opposed to the presence of a business-friendly innovation centre at Bletchley, even though it was this centre which originally paid for the refurbishment of the Bletchley Park manor and its surrounding land.

The Bletchley Park Science and Innovation Centre houses 50 hi-tech firms and has added about 250 jobs to the local area.

Its boss, Tim Reynolds, is also head of the TNMOC trustees, and is understood to have bailed out TNMOC to the tune of £100,000 when it was in arrears with the Trust, which is its landlord. The innovation centre also helped to stump up cash for the refurbishment of Bletchley Park and the establishment of the Trust.

Reynolds said: "We want an independent review because the current situation is intolerable. Bletchley wasn’t saved by the Trust, it was saved by us and TNMOC.

"We have no say in the overall strategy at Bletchley, so you can see our frustration. We would like to see an approach which pays respect to what happened here in World War II, educates the public and brings world class research back to Bletchley Park.

"This is the ultimate location for British innovation. It’s easy to say this is a war memorial, which is what the Bletchley Park Trust want to turn it into, but I think it’s so much more than that. There's magic here. I'd like to see us working together."

The Reg understands that local MPs are planning to back the campaign, although they have not yet responded to our questions.

In a statement, the Trust said it was spending £8m to develop the site as "a world class museum, heritage site and education centre".

However, it admitted that "change could be difficult".

"Like all families, sometimes disagreements happen and the right thing to do is to sit down and talk through any issues. Change is necessary to move the site into the 21st century.

"Bletchley Park and its Trustees have long sought to develop a better working relationship with The National Museum of Computing, namely through a joint ticketing proposal for both attractions, offered by BPT to TNMOC without condition.

"Sadly, for reasons known only to themselves, TNMOC placed unacceptable conditions on that agreement that made it impossible for BPT and its Trustees to accept. However, we remain optimistic that TNMOC might want to reconsider their position, for the greater good of Bletchley Park and of its public."

After a rather poor appearance on the BBC (1.38 onwards), the Trust is loath to let its boss Iain Standen talk to the media. Sir John Scarlett did not respond to an interview request from El Reg, perhaps because his last notable public appearance was due to his role in the Iraq War.

Do you know anything more about the Battle of Bletchley? Get in touch and tell us all about it. ®