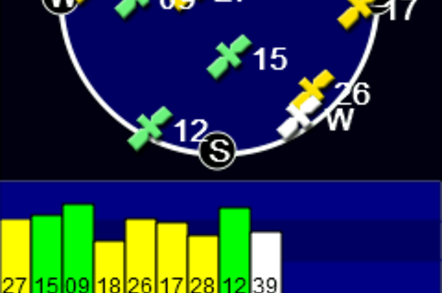 Microsoft has released a tool that it hopes will make it possible to add location-sensing abilities to many more devices.

The Microsoft Cloud-Offloaded GPS Experimental Kit is part of an effort to gather location data from GPS satellites without using much power. That's important because, as Microsoft explains, few applications drain a mobile device's battery more rapidly than contacting satellites. Redmond therefore wonders what might happen if devices “log just enough raw GPS signal for postprocessing” in the cloud, instead of doing everything on the mobile device itself.

Microsoft’s even cooked up a cloud service, dubbed Low Energy Assisted Positioning (LEAP), to do that work. In this paper, the researchers explain it works as follows:

“The GPS receiver only needs to be on for less than a second to collect the submillisecond level propagation delay for each satellite's signal.

With a reference to a nearby object, such as a cell tower, the LEAP server can infer the rest of the information necessary to perform GPS position calculation.”

CLEO devices cannot go online: users must gather their SD cards to upload data into a PC. But there's nothing to stop a CLEO being attached to something moving, where it will presumably last longer than conventional location-tracking devices thanks to its skimpy data-generating design.

At a time when plenty of apps offer real-time data acquisition and processing, this experiment may not seem particularly sophisticated. But with a bit more polish applied, Microsoft could conceivably find itself with a very handy addition to mobile device operating systems. And with a little lateral thinking it could find itself with a very interesting device and service combination to fuel its aim of becoming a devices and services company.

One small wrinkle suggests itself: Google got itself into an awful lot of trouble by geolocating WiFi modems. Material about this project mentions using known pieces of infrastructure like cell towers to assist the location process, but neglects to say how Redmond came by or intends to source that data. Surely Microsoft won't go where even Google now fears to tread? ®

The secret to good cloud is ... research. Detailed product research