'Nancy from the air' vid lands lad in hot water 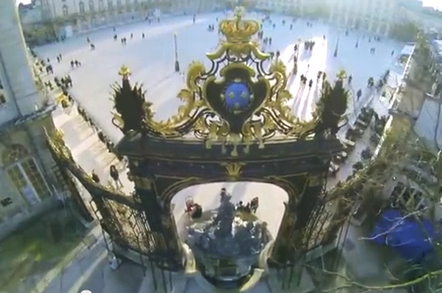 A French youth who used a drone to capture impressive aerial footage of the city of Nancy is facing an appearance before the beak on a charge of "endangering the lives of others".

Nans Thomas, 18, strapped a GoPro camera to an unspecified vehicle* he bought on the internet to produce a noteworthy video, which quickly became a big online hit.

Unfortunately, as Est Republican explains (in French), he wasn't aware that French law prohibits such jaunts without proper training and air authority permission. The success of the video attracted the attention of the powers that be, and Thomas quickly received a letter from the Regional Directorate of Civil Aviation, pointing out the relevant legislation.

A knock on the door from the boys in blue followed, and the young man is now awaiting his day in court with "anguish". He said: "I didn't know I needed permission. Also, there wasn't any indication when I bought the drone on the internet."

Nancy's public prosecutor's office explained: "If the machine crashes in a densely populated area, the consequences could be serious. The use of these drones also raises questions of privacy."

In Paris, meanwhile, a member of the French Foreign Legion was arrested on Tuesday for buzzing the Eiffel Tower with a "miniature plane".

The 22-year-old Ecuadorian was placed in custody pending a date with the magistrate yesterday, also on a charge of "endangering the lives of others". ®

*Likely a quadcopter, we reckon.