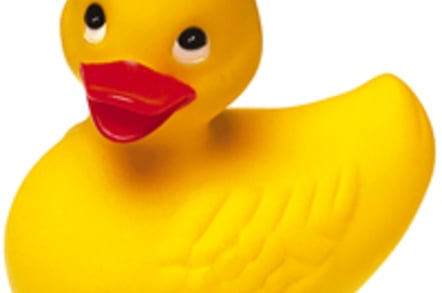 The governor of Wisconsin is set to sign into law a bill which will finally legalise the popular local activity of rubber duck racing, joining Minnesota and Michigan where plastic bathtoy contests are already legal.

For years, the organisers of illicit duck races in the state had been forced to live in fear of police raids and prosecution, as the local Justice Department regarded the events as falling under the heading of "illegal gambling".

Rather than desperate addicts staking their children's food money on surreptitious duck races held in disused warehouses and run by organised crime, however, such events as the "Ducktona 500" and the "Lucky Ducky Derby" seem to be reasonably wholesome family-day-out type affairs in which numbered ducks are raced down rivers as a fundraising activity, generally by non-profit organisations.

Nonetheless the Wisconsin heat has taken a dim view, reportedly (according to the AP) warning the village of Mishicot that its annual duckapalooza violated the law. In the states of Minnesota and Michigan, by contrast, rubber duck racing is legal.

Perhaps fearing that local aficionados of the sport might travel to other jurisdictions to get their kicks, local politicians have acted at last. The Wisconsin state senate voted to pass a bill legalising duck racing on Tuesday, and it now lacks only governor Scott Walker's John Hancock to go into force.

Local fans of the sport will no doubt be saying: Thank duck for that. ®