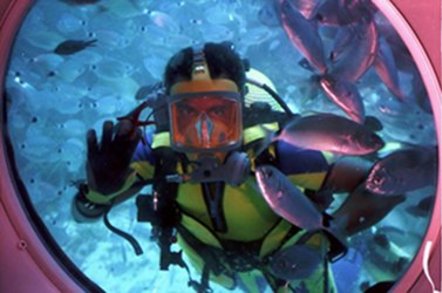 Riverbed, the WAN optimising and cloud storage gateway biz, has announced a sparkling new Steelhead appliance and pretty shiny results as it recovers from digesting an acquisition. Which first? Let’s go for the revenues and earnings.

Fourth quarter 2013 revenues were $283m – satisfying growth compared to revenues of $262m in the previous quarter and $238m a year ago. Profits, though, were another matter. They were just $8m - 2.8 per cent of revenues - which contrasts to a 6-8 per cent margin in 2011 and 2012. The previous quarters saw profits of $3.8m and a year ago Riverbed reported $5m in profits. Things are getting better. 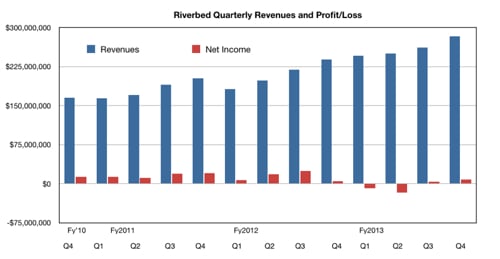 Now let’s look at profits/losses as a percentage of revenue: this is revealing.

Something dreadful happened to net income after the third quarter of 2012, with a presaging of the problems in the first quarter. 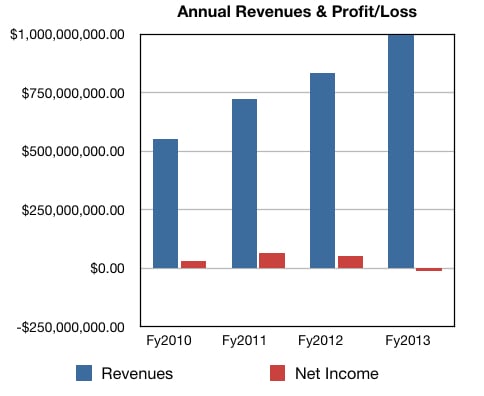 The conclusions from these three charts?

Riverbed bought Opnet Technologies, a network traffic management company, for $1bn in late 2012, and the after-effects of integrating that acquisition have included relatively uncontrolled spending.

The company said WAN optimisation was becoming a commodity market (= lower margins) and so it redefined itself as a location-independent computing company in November last year – an attempt to break out of the WAN optimisation niche. Opnet is a key part of this.

The outlook for 2014 is brighter and Riverbed is now moving ahead again, with its new appliance part of that.

Kennelly said in November: “With Steelhead, SaaS apps like Microsoft Office 365 can be delivered up to 33 times faster while using 97 per cent less bandwidth.”

Steelheads are claimed to deliver up to 60x WAN performance acceleration and up to 99 per cent bandwidth reduction. They come in EX branch office connect versions, CX larger branch office and a data centre variants, and, now, a DX data centre-to-data centre box.

This is the Steelhead DX Edition 8000 Series, designed for use in datacenter-to-datacenter data replication. It features:

You can get a specsheet here (small pdf).

Hardware is so 2013, especially when it ties you to MPLS

An entomology of bugs