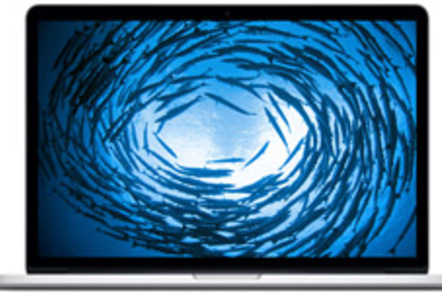 Apple has filed for a patent on a system which places the controls for a notebook computer within the outer bezel of the screen.

Patent number 8,654,524, published Tuesday, describes a set of systems in which sensors are placed in both the casing and outer screen bezel (the black box around the outside of the display) allowing for the implementation of controls and buttons.

Under such a system, Apple could create a notebook that uses sensors on the casing and acreen itself to operate as input devices for the system, adding additional controls without creating the need for additional real estate on the device.

"In one embodiment, an electronic device includes a housing configured to function as an integrated housing and I/O device and one or more sensors obscured by a wall of the housing," Apple writes in the patent document.

"The one or more sensors may be configured to sense inputs, such as through a touch or via the wall of the housing."

The application goes on to further describe integration with proximity sensors and peripheral devices, outlining a system to identify ports and suggest which cables should be used. In addition to touch, the system could recognize gestures such as multiple taps or squeezes to control different activities.

The patent appears to suggest new ways for Apple to place controls and buttons within its devices without needing to add actual hardware buttons. Such a minimalist approach has been a hallmark of Apple devices since the introduction of the iPhone in 2007.

It always bears noting that patent filings are just that: filings describing a theoretical product. The technology may or may not ever be implemented by Apple in a prototype device, let alone integrated into a final product from the company. As such, the patent should hardly be seen as a preview of coming technologies.

Still, bezel-mounted controls could provide an extremely practical and useful way to implement shortcuts and specific controls for applications in future versions of OS X which implement iOS style features.

Recent Apple patent applications and granted patents have ranged from the practical (an application for facial recognition for device log-in) to the more esoteric (a patent granted for mood-sensing technology), and have described a full range of hardware and software platforms. ®