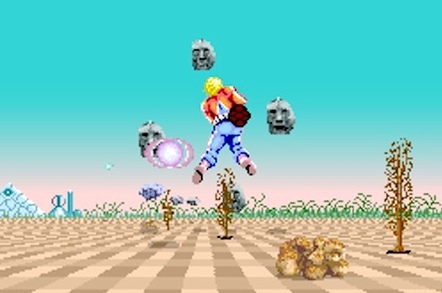 Antique Code Show One of the outright joys of retro gaming is being able to look back at some very esoteric design choices and general weirdness that sometimes surrounds old titles: forgotten little segments of youth culture, odd nuances that found their place due to technical limitations, and novel arcade game concepts designed to draw more and more punters in.

Space Harrier was the remarkably successful precursor to Sega’s later hits like Out Run and Afterburner, and must surely have been born out of R&D experimentation in Sega’s infamous AM2 lab. You can imagine the chequerboard floors and disjointed range of enemies coming together as small technical experiments to test the latest arcade chipset. 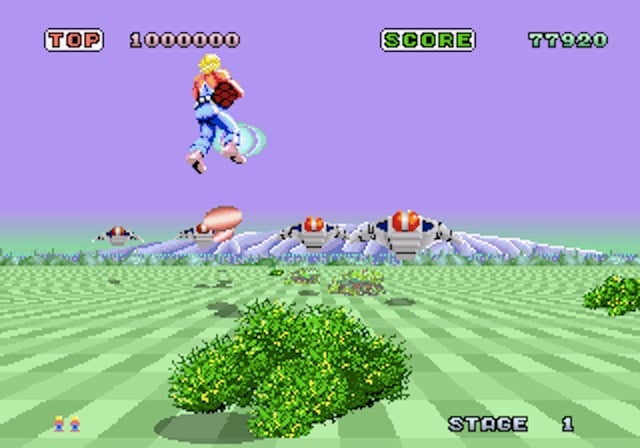 In this game, you’ll meet alien blobs, Easter Island-lookalike heads, random geometric shapes, the odd mecha-inspired robot, and a whole range of dragons. Then there are the inevitable magic mushrooms, which I suppose gives the hallucinogenic and random visuals some context at least.

That new hardware board featured not one, but two Motorola 68000 processors, and an Intel 8751 CPU on the side for good measure. A supplementary "super scaler" graphics board contained Sega’s closely guarded custom chips for sprite drawing, rotation and scaling – running at 60 frames per second and displaying up to 128 sprites per frame, in 32,256 colours.

This was definitely no wimp in the arcade world, and successive iterations of the powerful sprite-shunting chipset became the backbone of Sega’s racing games, all the way up to the 1990s polygon changeover. 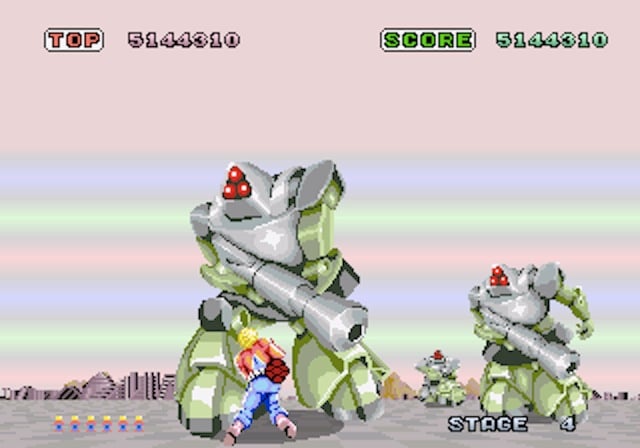 Mecha in ya face

Audio was taken care of by a Zilog Z80 CPU, controlling a Yamaha FM synthesis chip and Sega’s own PCM unit, with clear voice samples that have been lovingly placed in the hall of gaming mythology: “Welcome to the Fantasy Zone, get ready!” and “You’re doing great!”

The game is, of course, well remembered for its ground-breaking cabinet. In many ways, it was this machine that signalled the start of a brave new world of moving and grooving arcade units, the deluxe sit-down cabinet featuring the sort of hydraulic seat that would become ever-present in arcades for years to come.

It’s interesting to note that in 1985, the fact that you played this game by sitting in a spacecraft-like vehicle, while the on-screen character is actually a jetpack-propelled man – who occasionally goes for a run – didn’t seem to matter one jot. With speakers booming just behind a player's head, the experience was intoxicating. 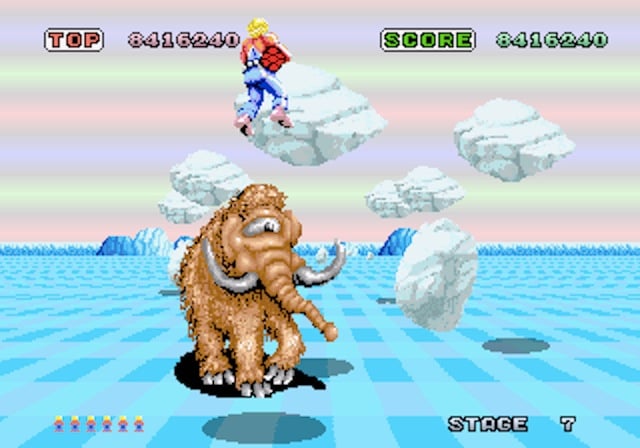 For the skilled Harrier player, levels spilled past at break-neck speed, with names like "Moot" and "Ceiciel" just in case you thought you were coming back down to Earth. The 3D, on-the-rails action required swift reactions to avoid objects while trying to shoot down as much of the oncoming assault as possible. Bonus stages saw Harri – your Flash Gordon-esque jetpack warrior – ride a huge yet gladly friendly dragon, called Euria – on a mission to destroy as much greenery as possible for a well-earned tree-kill bonus! Presumably eco-awareness hadn’t really kicked in yet, not in Japan anyway.

A fully analogue joystick was another novelty that lent the title a distinct intensity. Tapping into flight simulator sensibilities, up was down and down was up, yet let go of the stick and Harri would return to the centre of the screen – and inevitably annihilated by enemy fire along the way.

So to be successful, you needed to keep hold of that stick like his life depended on it – which it did of course – leading to a few painful arm-aches and clenched-jaws for well-seasoned players. The only significant let-up was an occasional sparse piece of ground to drift through after an end-of-level boss had been despatched. Space Harrier demanded endurance; check out this run-through and just imagine the latent tennis elbow complaint:

After scoring such a huge arcade hit, Sega took the opportunity to branch out sideways, taking Space Harrier’s weirdly magical setting into a spin-off game: Fantasy Zone. This more traditional, cutesy 2D-viewpoint shooter made the arcades first, then found its way onto Master System, PC-Engine and Megadrive, among others. Further sequels and spin-offs followed, and it even ended up being remade in polygons for the Playstation 2, such was its long-running popularity on Japanese consoles.

Space Harrier itself was ported to umpteenth home platforms with varying degrees of success. The lightning fast 3D action of the arcade was certainly problematic for conversions – there really was little hope of simulating such fluid speed. Still, Elite picked up the licence, and its Spectrum version was well received, retaining some semblance of the visuals if not much else from the arcade. The Commodore 64 effort didn’t fair so well, hampered by jerky action and poor collision detection.

The extra power of platforms like the Amiga and Atari ST helped to create more accomplished versions. Mouse availability was the trump card here – working as a good substitute for the original’s analogue joystick. No, these Space Harriers still weren’t anywhere near as smooth or impressive as the arcade, but they were a good few steps towards it and much more playable. 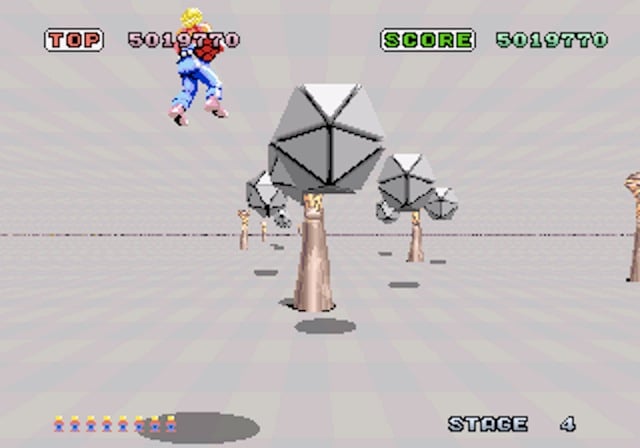 Bring on the geometrics

As for Sega’s own home hardware, the 8-bit Master System received an experimental 3D version, with players invited to wear that machine’s unfashionable, 3D enhancing specs. Lift muzak-style loops excluded, it wasn’t especially great. In 1989, Space Harrier 2 made an appearance on the Megadrive, and while it looked quite pretty, the choppy frame-rate was a bit of a disappointment. Incredibly, it wasn’t until 1994’s release on the Sega 32X – the 32-bit upgrade that could be wedged onto a Megadrive — that Space Harrier finally got itself a truly decent home conversion.

It’s testament to the huge following amassed by the original arcade game that it didn’t stop popping up all over the place since. It has graced many a compilation for Sega Saturn, Gameboy Advance, Playstations 2 and 3, and Xbox 360, with a full polygon remake for PS2 also appearing in 2003. It turned up as a mini-game in both Shenmue titles on the Sega Dreamcast, and in more recent times versions have appeared on the Wii Virtual Console Service, and on Nintendo 3DS, not to mention lots of quirky cameo references within other games too.

You can compare a whole range of conversions here. 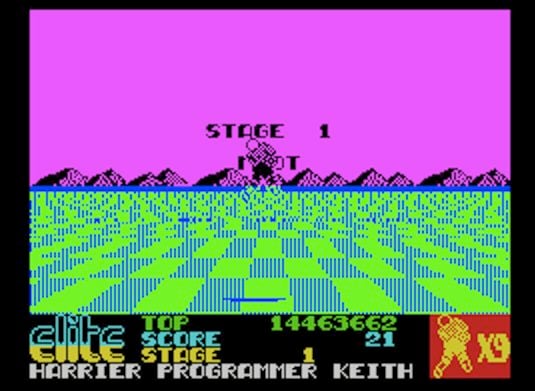 The Spectrum version was crude... 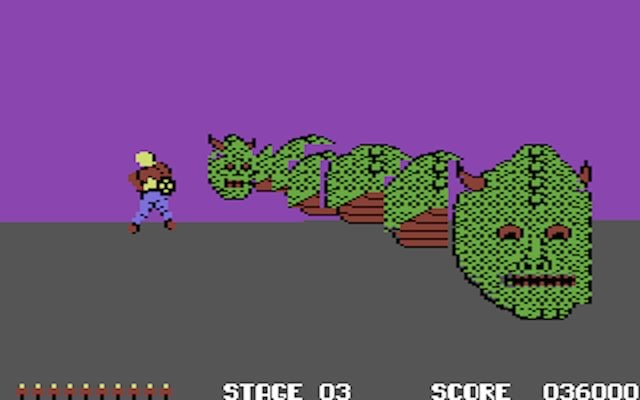 ...but is probably better than the C64 port

It’s hard to comprehend why so much love is still felt for this half-baked (by today’s standards) shooter. But then again, if you can remember encountering Space Harrier’s novel cabinet and quirkiness in a mid-1980s arcade, you’ll also remember accepting it as a work of sheer genius there and then. It broke the gaming mould, and suggested a whole world of possibilities to come.

When people hark back to golden moments of gaming, memories are of course tempered by the rose-tinted spectacles of youth. Yet back then there was a distinctive innocence and freshness in a gamer’s approach – as video game rules and ideas were laid down for the first time.

These days, with games here, there and everywhere, it’s hard not to be jaded at times by the latest regurgitation of an old concept. That or I’ve been kicked out of the Fantasy Zone for being an old fart. ®