UNIX successor arrives on the planet of the GNU 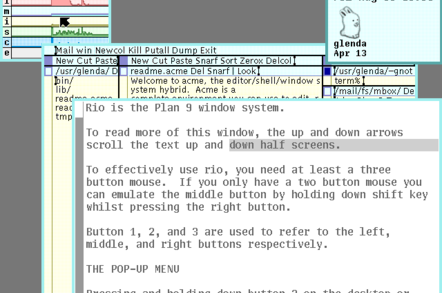 Plan 9, a successor to Unix developed during the 1980s by Bell Labs, is now available under the GNU Public Licence.

The operating system was never particularly popular or prevalent, but did generate enough of a following to spark a successor of its own known as Inferno. We also wrote it up last year, saying that “Compared to modern Unix, it's also very minimal and lightweight.” Which is a good thing.

The world of Plan 9 is not fast-moving, with the OS released to the general public for non-commercial use in 1995 and then made available to all and sundry under the Lucent Public Licence in 2002. That licence, say GNU folks, is less-than ideal “because of its choice of law clause.” The Lucent licence specifies “the State of New York and the intellectual property laws of the United States of America” as the jurisdictions governing interpretation of its terms and conditions. GNU therefore recommends it is fine to footle around with Plan 9 under the licence, but not to release your own software with Lucent's legalese.

It's not clear why Alcatel-Lucent decided to make the OS available under the GNU GPL. Whaterver its reasons, Plan 9 is now just that little bit more intellectually pure and maybe just a bit more attractive for future development for those who don't like the idea of New York's courts.

If you like the idea of taking Plan 9 out for a spin, downloads can be found here. ®

Alcatel-Lucent embarks on cloudy board shake-up

Decision due by July 27

Says they're 'not close competitors'

A step closer to settlement