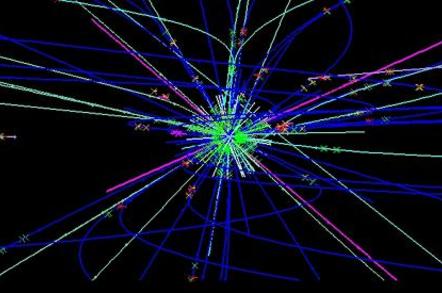 A couple of lawyers are calling for the US government not to fund any further research at one of its premier heavy-ion colliders, the RHIC, because of a discredited 15-year-old “doomsday scenario” debate.

Alert readers will recall that back in 2008, botanist Walter L Wagner had a court case against the Large Hadron Collider thrown out – but you may not know that Wagner's concerns were echoes of an earlier particle-collider-doomsday scenario.

The idea that the LHC would create particles comprising up, down and strange quarks – “strangelets” – creating a runaway chain reaction that would destroy the world, is one that comes from the early days of the Relativistic Heavy Ion Collider (RHIC) project at Brookhaven National Laboratory. "Strangelet danger" sat alongside the idea that colliders would suck us all into a black hole, or make the vacuum state of the universe somehow unstable.

It's likely that the notion only gained currency because it had, at the time, a high-profile proponent – Sir Martin Rees, the Astronomer Royal.

Without that endorsement it may have never made a headline, since the “doomsday scenario” needs a few preconditions to become an actual threat:

That, as well as the “what if the collider creates a black hole?” and other similar doomsday scenarios weren't LHC-specific: they were merely borrowed from the late-90s RHIC controversy – and later dismissed by this 1999 report (PDF). As it notes: “The hypothetical chain of events that might lead to a catastrophe at RHIC requires several independent, robust theoretical arguments to be wrong simultaneously.”

That report was prepared by scientists from MIT, Yale and Princeton.

Wrong, according to some lawyers-turned-physics-theorists who got a platform over at that renowned, august, peer-reviewed scientific journal the, er, International Business Times. In this piece, Eric E. Johnson and Michael Baram argue that before RHIC receives any further funding under the President Obama's new commission to oversee the cost-effectiveness of the DoE's national labs, it should be subject to a brand-new risk assessment.

What risk, I hear you ask … why, of course, the risk that RHIC will destroy the Earth. As they write:

Critics have called for serious attention to the possibility that the collider might generate a subatomic object called a “strangelet,” which could, if certain assumptions are correct, start a chain reaction converting everything into “strange matter.” The process would, according to Sir Martin Rees, Astronomer Royal of the United Kingdom, leave the planet “an inert hyperdense sphere about one hundred metres across.

“In particular, the commission should take a sober look at one experimental program that raises a bizarre and little-discussed prospect of destroying the entire planet”, they say, blithely ignoring that the prospect has been discussed quite extensively over the years.

They fail to mention that Sir Martin's concerns were expressed back in the 1990s, and have not only been dismissed both by the prior report, but by events – namely, that in the presence of quite a number of particle colliders and a universe that's an enormous particle experiment, the Earth is still here.

However, you can trust a lawyer for document-combing: they revive a complaint by Sir Martin at the time that the report was flawed (it seems to have been supported by evidence since 1999, but never mind), and that a judge (we're all physicists now) said the scientists who wrote the report had a conflict of interest. It was written by physicists, you see, whose specialty made them both competent to commend it and likely users of the facility.

Of course, the idea that particle physics has 15 years' worth of better information isn't a good argument in front of a lawyer: “The RHIC is now entering its 15th year. The machine has also been continuously upgraded since the report. After the next round of improvements, it will have increased its ability to produce collisions by a factor of 20 over the original design. Meanwhile, the state of knowledge in nuclear physics has advanced. The suitability of models and assumptions used in the original analysis might be profitably reappraised.”

So what were the original assumptions that the lawyers want reappraised?

“Large-scale science experiments have proved highly resistant to meaningful court review,” the authors write. Peer review of a shed-load of data over 15 years is, apparently, not meaningful.

Lawyers, however, are good at lobbying, and in today's anti-science world, we can expect a lot more of this nonsense to emerge. ®