A few lucky US cities to become envy of the nation 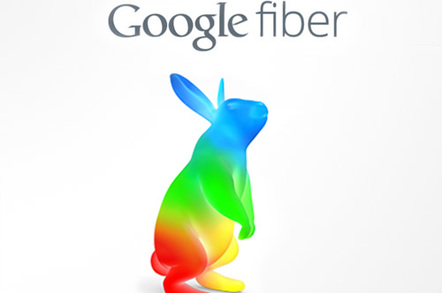 Google Fiber is the fastest broadband internet provider in the US, but according to the Chocolate Factory's CFO Patrick Pichette, its 1Gbps connection speeds are going to increase ten-fold.

Pichette told the Goldman Sachs Technology and Internet conference that the firm is actively developing the equipment to pump 10Gbps of data into homes and offices on its network and will deploy it faster than people expect.

"That's where the world is going. It's going to happen," Pichette said, USA Today reports. Originally, the plan had been to roll this out in a decade but "why wouldn't we make it available in three years? That's what we're working on. There's no need to wait," he added.

Getting faster broadband into people's homes and businesses was vital to Google's own business, Pichette said. The more people used the internet, the better it is for Google, and he opined that cloud services would become much more popular if bandwidth lag were eliminated.

While Google Fiber retains its speed advantage, the number of homes it actually reaches is tiny. The company set up a test network in Palo Alto in 2011 before rolling out its first commercial installation in Kansas City, Missouri, after strong public demand.

Next on the list for deployment is Austin, the cultural capital of Texas, and Google also spent one dollar buying up the municipal network of Provo, Utah, and will invest $18m in finding out where the network cables are and getting them up to speed.

Google's move into the ISP field was initially laughed at by the major network providers, but it has had an impact. Shortly after Google announced it was coming to Austin, AT&T told local residents that it would start a gigabit internet service of its own, albeit on a very small scale.

When asked if Google was planning other roll-outs for fiber, Pinchette refused to be drawn. "Stay tuned," he told the conference. ®