Intel Labs 'geeks' flash Edison kit to El Reg: We do it for the BIRDS 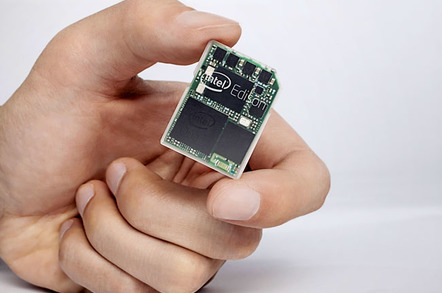 Intel’s recent Edison launch was much more than a tilt at the burgeoning wearables space – Chipzilla has been working on designs for everything from a smart birdfeeder to a paper notebook on which the user can compose emails, according to a chief boffin.

Dr Randolph Wang is chief scientist at Intel Labs China, where he had up to 50 people working on the SD card-sized computer project over the past three years, he told The Reg.

“We’re Intel but a remote corner of the empire, operating more like a start-up,” he said. “The whole bunch of us are geeks. We wanted to have fun but do something novel.”

Once the team had arrived at the pluggable, self-contained SD card-sized form factor it began to evolve the product.

First up, this involved plugging it into off-the-shelf devices like cameras but soon it became necessary to build devices from scratch with Edison in mind, which Intel did with help from Beijing Tsinghua University’s department of industrial design, said Wang.

Aside from the smart coffee mugs demoed alongside the Edison-powered baby monitor at CES in January, the team has designed 30-40 separate devices to push the mini-computer into diverse areas.

One El Reg favourite involves a smart birdfeeder with a built-in camera.

“We run customised bird recognition code on the Edison powering this thing, so that, for example, if it’s a common sparrow, it will not capture or transmit the results,” said Wang.

“The bird feeder also works with other Edison-powered gadgets, so if it detects particular kinds of birds being captured, for example, it’ll display a bird icon on grandma’s teacup.”

Another prototype involves a paper notebook “powered” by Edison.

“The kind of applications that we have demonstrated on it include hand-writing recognition that allows you to send emails with paper and pen,” Wang explained. “It works with your smartphone so you can compose the body of an email with paper and pen, but certain UI elements like confirming a recipient are done with the phone; an approach that combines the best of both worlds.”

Another application could be the ability to draw cartoons with handwritten commands and have those images become digitally animated on the screen, he added.

These examples lend credence to Wang’s insistence Edison is not merely a wearables or Internet of Things play but an “idea enabler”.

“A lot of emphasis is placed on wearables and IoT and a lot of these we could and would like to do but the words are too confining,” he said.

“We’re not claiming we can do everything. If you try to be everything you can end up being nothing.”

Two areas Edison will not be supporting anytime soon include the sensor-based systems known as “smart dust”, and support for media playback (there’s no GPU built-in).

However, Wang admitted that “low power graphics” will play a part in Edison’s future development – although there will be “several directions of iterations”.

He also promised that Intel would, in a couple of years, be able to produce a true SoC with everything – including NAND Flash and DDR – combined on-die to enable even lower cost, smaller gadgets in the future. ®