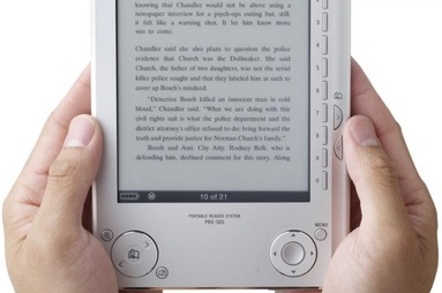 Struggling Sony has announced that it is quitting the ebook-selling business in the US and Canada and will instead rely on Kobo to supply content for its ereader devices in North America from now on.

"Sony's Reader Store customers and their current eBook libraries will transfer to the Kobo ecosystem starting in late March," the company said in a press release.

Just how many of those customers there are, Sony isn't saying. But although Sony was a pioneer in the ebook business – it was the first company to develop an ereader with an E ink screen – its digital bookstore has long lagged behind Amazon, Barnes & Noble, and Kobo for market share.

Not that anyone other than Amazon is exactly prospering in the ebook business. Revenues for Barnes & Noble's Nook division were down 60.5 per cent during the recent holiday season, year-on-year. And although Kobo trumpets recent market share gains, far more readers choose Amazon's Kindle devices than Kobo ereaders.

In late March, Sony will email Reader customers codes that will allow them to transfer their existing Reader Store libraries and any store credits they may have to their new Kobo accounts. The Reader Store itself will close on March 20.

Once the transition happens, however, Reader users will not be able to buy Kobo books directly from their devices – at least, not at first. Initially they will only be able to download them to their PCs and then load them onto their devices via USB using a new version of the Reader software for Windows and OS X that Sony will release in late March.

Kobo will launch a new version of its online store in late May that will be accessible from Kobo devices directly. The catch, though, is that it will only work with PRS-T1, PRS-T2, and PRS-T3 devices. PRS-900 and PRS-950 devices will no longer have direct access to an ebook store after the transition, and the only way to load content onto them will be via USB.

As part of the deal, Sony says it will also begin preloading the Kobo app for Android on its Xperia smartphones and tablets.

Sony's decision to exit the bookselling biz comes in the wake of its announcement that it is jettisoning its PC business, another unprofitable venture. The consumer electronics giant says it will also lay off around 5,000 workers by the end of its fiscal 2014. ®