Music is free on the internet - therefore everyone should cough up 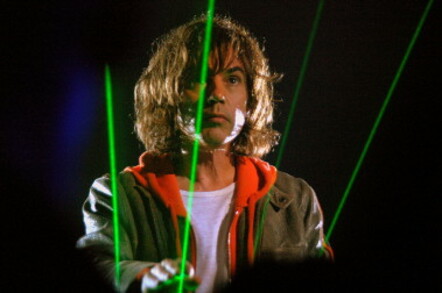 Without the ability to play music, Jarre argued, the gadget wouldn't be worth as much as it currently is.

“We should never forget that in the smartphone, the smart part is us creators,” Jarre told the Guardian. “If you get rid of music, images, videos, words and literature from the smartphone, you just have a simple phone that would be worth $50.”

“Let’s accept that there’s a lot of innovation in the smartphone, so let’s add $100 for this innovation – the remaining $300-$400 of the price should go to [the creators],” the veteran composer told the annual industry conference MIDEM, in Cannes this week.

"Paying artists is not a tax or cultural levy,” he said. Even though it’s hard to call a mandatory wealth transfer anything else.

Jarre’s logic is based on the slightly odd belief that “music is free” on the internet, and that it’s now impractical to ask consumers to pay for it directly. With Deezer and Spotify each bagging around $500 each annually from paying subscribers (Deezer reckons it has 5m paying subscribers, Spotify “over 6 million”), that’s also a slightly strange claim to make.

He may have one valid point: a gadget that doesn’t play music isn’t worth very much. In fact, it might be unsellable. Research conducted two years ago attempted to quantify how much the ability to play music on a given device was worth to punters. The figure for smartphones ranged from £6.67 to £23.60. And for tablets, up to £33.50 for a £499 fondleslab.

However, there are two strong objections to imposing a music tax on hardware: one utilitarian, and one ethical. The ethical argument is that it is unfair for smartphone owners who don’t use the device for music to pay the music industry. Why should they subsidise music lovers who do? With an indiscriminate gadget levy, that’s the reality.

The second objection is more practical: levies just don’t raise very much money. Apple sold 51 million iPhones in the last three months of 2013. Even with a levy of £23.60 per iPhone, that would have only realised £200m for labels, publishers and artists. It would make more sense to grow the market for Deezer, Spotify and the other dozens of me-too streaming services.

In addition, one may also legitimately argue that the music business is a business, not a tax collection quango - and giving it guaranteed tax revenue makes it soft and lazy... And much less inclined to "do business".

The industry actually knows this very well. It generally seeks levies as a point of principle, rather than a revenue stream. The only part of the music industry which disagrees, and which really loves music taxes, is the collecting societies. Particularly French collecting societies, since the French love to tax things. (The French composers' society sees seven per cent of its income from levies - far more than others).

Jarre was speaking in his role as president of CISAC, the organisation representing … collecting societies. Quelle surprise!

Jarre was on stronger ground arguing that the distributors profiting enormously from footfall from music - such as YouTube - should do more. But if he insists that music at the point of consumption must be free, where would they get this money from? Buy a printing press, perhaps. ®

MusicAlly and the Graun have more quotes.

So, about that Google tax on Android makers in the EU – report pegs it at up to $40 per phone

Fee offset if Search and Chrome included alongside Play Store, of course