The glacier that sank the Titanic indulges in further mischief 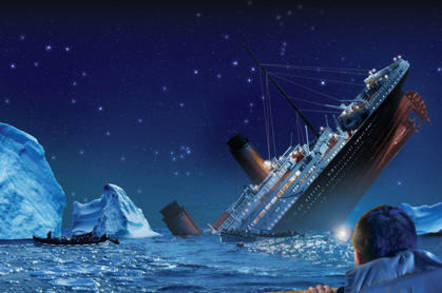 The river of ice that's widely thought to have calved the iceberg that sank the Titanic has sped up to such a rate that it may now be the fastest flowing glacier on the globe.

"We are now seeing summer speeds more than four times what they were in the 1990s on a glacier which at that time was believed to be one of the fastest, if not the fastest, glacier in Greenland," Ian Joughin, coauthor of a paper detailing the findings, told the BBC.

The Jakobshavn Glacier's summer speed, as you might assume, is notably snappier than its pace during the cold winter months. But don't expect to see it rushing headlong into the sea. Instead, its calving front is actually retreating inland year by year as temperatures increase in the Arctic.

According to Joughin's study, published in the European Geosciences Union journal The Cryosphere and conducted with fellow researcher Ben Smith, also of the University of Washington's Polar Science Center, the Jakobshavn Glacier retreated inland over a kilometer more than usual during the summers of 2012 and 2013. As the abstract to their paper explains, although terrain will affect the glacial speed-up in coming years, they expect it to retreat "[about] 50 km farther upstream, potentially by the end of this century."

This retreat is a cause for some concern, seeing as how unlike sea-borne ice, melting land-based ice adds to sea-level rise as it dumps its chilly self into the ocean. "We know that from 2000 to 2010 this glacier alone increased sea level by about 1mm," says Joughin. "With the additional speed it likely will contribute a bit more than this over the next decade."

A millimeter here, a millimeter there, all coupled with the overall expansion of the mass of a warmer ocean, and pretty soon you're talking about beachfront property in Denver, Colorado.

Well, no, of course – but you get the implications. ®