Server boss steps up to the plate, ends months of fevered speculation 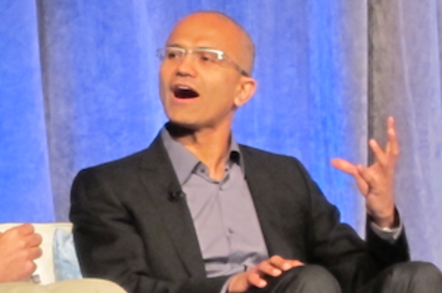 Forty-six-year-old Nadella will, as earlier reports had suggested, assume the role immediately, Microsoft said on Tuesday.

Also, as reported, Bill Gates is stepping down as Microsoft chairman.

Gates will stay on the board but in the newly created role as founder and technology advisor.

In a message to the world, Gates said it would be “fun” to define the next round of products working with Nadella.

“He has a remarkable ability to see what's going on in the market, to sense opportunity, and to really understand how we come together at Microsoft to execute against those opportunities in a collaborative way,” Ballmer said.

Gates is a close personal friend of outgoing chief executive Steve Ballmer while Gates had worked with Thompson in the search for a new CEO.

Nadella’s appointment ends five months of feverish speculation and reporting over who would succeed Ballmer.

Among those supposedly in the running included Ford CEO Alan Mulally and Nokia chief Stephen Elop, with wild reports lassoing in Ericsson chief Hans Vestberg at one point.

Nadella emerged a front runner as those reports and rumours ran their course.

The Reg put Nadella on its list of 14 possible CEOs early on.

Nadella was recently vice president of Microsoft’s Cloud and Enterprise group, created in a massive corporate re-organisation in summer 2013.

Prior to that, Nadella had served as vice president of the server and tools unit making and selling business staples including Windows Server and SQL Server. ®