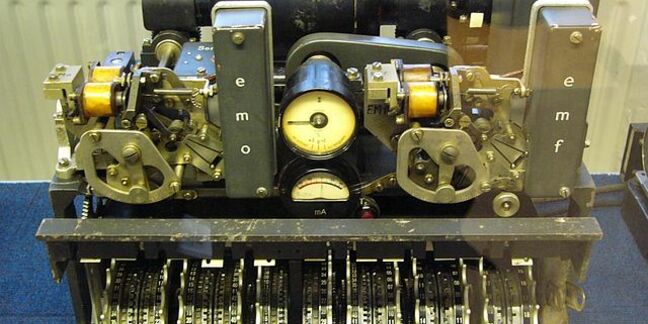 An engineer has claimed the war between the Bletchley Park Trust and the National Museum of Computing has prevented him from repairing one of the few WWII German cipher machines that remain in working order.

Sawyers worked on the restoration of the German-made Lorenz SZ42, which the Nazis used to transmit coded messages, and claimed the ongoing tensions between Bletchley Park and the National Museum of Computing have prevented him from continuing his work.

The mailing list letter read: "The continuing, blood on the walls dispute essentially locks me out of repairing the only functional SZ42 on the planet."

The letter continued, saying that he had brought the machine to a cipher challenge in Germany five years ago. But when it was switched on in Germany, the mains transformer blew.

"It was kind of ironic," Sawyers added.

Visitors to Bletchley Park used to also be shown around the National Museum of Computing, a separate institution which houses the Colossus code-breaking machine.

But Bletchley tour parties are no longer brought into the Museum and must pay a separate fee to visit it.

The museum used to have a good relationship with the Bletchley Park Trust, but this has foundered since CEO Iain Standen took the helm of the heritage site.

Sawyers added: "The only mention of the National Museum of Computing on the Bletchley website is buried here. What it does not mention is that you cannot visit the site just to see Colossus - you have to pay the site entry fee at the gate and then as a result of Byzantine politics pay extra to see everything to do with Colossus."

The National Museum of Computing claimed that the Trust were building a fence to make sure the two institutions are kept entirely apart.

"We owe it to the men and women who worked at Bletchley Park during the war and to those who have helped save Bletchley Park since the 1990s to play our part in telling the full code-breaking story," a spokesman said.

"Unfortunately, Bletchley Park Trust have told us that they will not negotiate until recently agreed debts are paid, even though a timetable for payment has already been agreed.

"The Bletchley Park site as a whole is a major tool to help educate young people. We should together be celebrating this history and the development of the British computing industry rather than erecting fences and splitting a heritage site."

We have written to Sawyers to confirm he wrote the post, but he has not yet replied.

The Bletchley Park Trust issued a long statement rebuffing many of the claims in Sawyers' post.

"It is now on permanent public display, in a secure case pertinent to its historic value, in an exhibition in the Block B museum that tells the remarkable story of the breaking of Lorenz by the Bletchley Park Codebreakers. All this [is] a wonderful marker of how far the Bletchley Park Trust has progressed in ten years."

It also denied it was neglecting the upkeep of the German cipher machine:

The Bletchley Park Trust now employs a Curator; the custodian of the Trust’s collection, responsible for its protection, preservation and conservation, in line with the standards you would expect for its value to the nation.

TNMOC is supposed to pay £100,000 to the Trust for its "Block H" building, where the Colossus and Tunny are located. It does not receive any government funding.

A number of readers have contacted us to share their thoughts about this story. If you know something about the Battle of Bletchley, please do contact us – click the author's name at the top to send an email or get stuck into the comments below. ®

Yes, the app that's not quite working yet