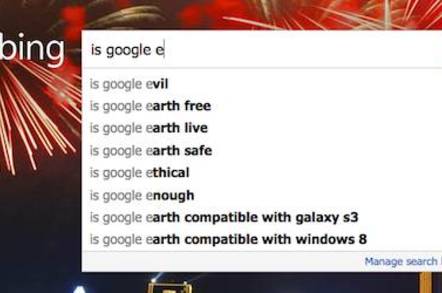 A Microsoft-backed lobby group is urging Brussels' competition chief Joaquin Almunia to open up Google's latest revised offer of a conciliatory package of tweaks to its search biz to the ad giant's rivals.

Earlier this week, it was reported that the European Commission was closing in on a settlement deal with Google that would apparently allow the company to dodge admittance of any wrongdoing and a fine that could be as high as 10 per cent of its annual global turnover.

Almunia's office has declined to comment on the claim that it had received a fresh package of concessions from Google to try to end a three-year long antitrust investigation into the multinational's search business practices in Europe.

Google's enemies have long claimed that the firm commands airlock control of the search market in the 28-member bloc, thereby suffocating other online players.

Almunia has been probing those claims and has twice rejected offers from Mountain View.

But it has been reported that the EC's vice president is happy with Google's third attempt at a settlement deal with the commission. Sources have claimed that the rehashed offer is "much better" even though it apparently contains few "dramatic changes".

Brussels' competition boss has strongly hinted that it has reached a "decisive moment in the investigation".

However, it i not the first time such rhetoric has been heard from Almunia. He certainly appears to understand how to build tension on this particular case.

Lobby group ICOMP - which includes Microsoft and the Premier League as backers - has written a letter (PDF) to the antitrust chief in which the outfit's legal counsel, David Wood, called on the commission to allow Google's foes to scrutinise the latest offer.

"Only a market test will bring the transparency and inclusion necessary to support a solution that, in your words, 'many people will receive in a positive way'," he said.

The Register asked Almunia's office to comment on this story, but it hadn't got back to us at time of writing. ®