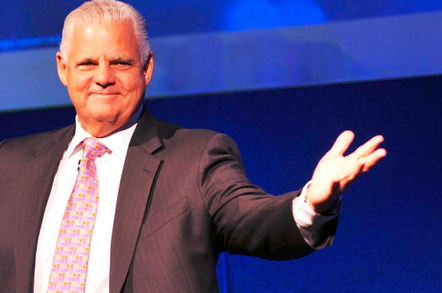 Big storage beast EMC closed its 2013 fiscal year with impressive growth in its final quarter but sees lower growth in the future. It also announced 1,000 layoffs on the way in Q1 as it rebalances towards flash, integrated systems, mobile and cloud computing.

According to EMC, the staff cuts are down to its internal rejigging to decrease the effects of back-end loading of customers orders in each quarter.

Full year revenues were $23.2bn, a tad under the $22.5bn EMC CEO and chairman Joe Tucci had hoped for last quarter but still 7 per cent higher than the fiscal 2012 total.

Net income for the fourth quarter was a clear $1bn and a full 71 per cent higher than the third quarter number; meaning more deals and more profitable deals; while profit as a percentage of revenue rose to 14.9 per cent from the third quarter’s 10.7 per cent. 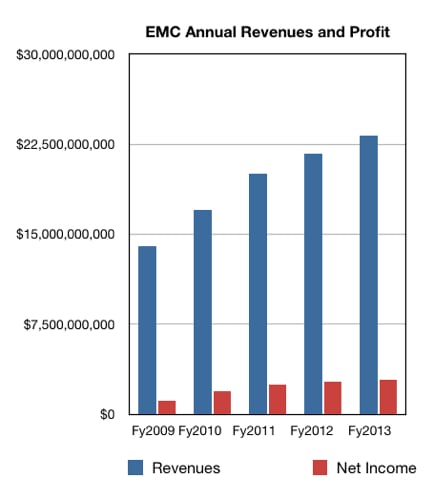 The annual chart shows revenue growth as well as profit growth tailing off. EMC Information Infrastructure CEO and EMC CFO David Goulden alluded to this in his prepared remarks: “Despite 2013 IT spend growth that was lower than we expected, EMC achieved strong revenue and profit growth. This outperformance relative to our industry speaks to the power of the EMC portfolio, solid operational and financial model and consistent execution.”

Well, all of this looks great but, nevertheless, EMC announced a restructuring plan. Of course Goulden said it was more of a "rebalancing", with up a 1,000 heads talking a walk. William Blair analyst Jason Ader said: “Management stated that the restructuring should be viewed more as a rebalancing, as the company moves people into "third platform"-oriented parts of the business and reduces headcount in legacy areas of the business.”

What’s third platform? It’s how EMC describes the latest wave of IT and involves the move to mobile devices, public and (Tucci stresses the “and”) private cloud computing. The second platform is today’s IT minus mobile and cloud elements. There’s an EMC Third Platform webcast here.

Ader said he thought the layoffs “are being driven by new architectures based on cloud, flash, white-box solutions, and integrated systems.”

Ader said: ”We believe that the company's muted revenue growth target for 2014 is reasonable, given ongoing product cycles (VNX, Data Domain, XtremIO), with the major risk being a tailing off of VMAX sales, which … still represent the company's largest product line. We are also concerned about declining margins in the information infrastructure (II) business.”

All-in-all Ader said EMC’s storage business is decelerating: “Storage sales were up 4.5 per cent in 2013 and are expected to grow only 3 per cent in 2014 (we estimate 2 per cent).”

This is making services more important, also VMware relatively more important and emphasising the need for the Pivotal business to grow strongly and return a profit.

Rakers suggests a VMAX refresh may be coming in the second half of this year. We understand several ViPR announcements could come during the year too. ®