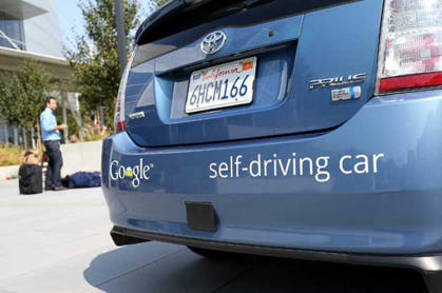 Google has asked the United States Federal Communications Commission (FCC) for permission to conduct radio tests in the 76-77 GHz bands, probably as part of its ongoing autonomous vehicles research.

Mountain View's application to the FCC has been published here, and was turned up by sharp-eyed Google-watcher Steven Crowley.

Crowley notes in his blog post that the 76-77 GHz band is used for short-range vehicular radar, for example for collision avoidance.

That's supported by the FCC filing, in which Google says it wants a nationwide license for the tests. The filing also reveals that the radios it wants to test will have beams 5°, 22.5° and 30° wide, and will not use antennas more than 6 metres above the ground. The low-power systems would use FM and BPSK (binary phase shift keying, the simplest form of PSK) modulation.

Crowley states that Google had originally requested that its application be kept confidential, on the basis that the application contained information of “significant commercial value” – as well as the names of The Chocolate Factory's partners in the experiments, all the way down to manufacturer and equipment model numbers, which are still secret.

“Public disclosure will jeopardize the value of the technology under examination by enabling others to utilise Google’s information to develop similar products in a similar timeframe,” the request for confidentiality says.

If the FCC okays the application, Google have a two-year authority to operate in the 76-77 GHz band from the end of March 2014.

Last January, Crowley turned up a request by Google to run tests in the 2.5 GHz band using 50 base stations and 200 devices – specs which look a lot like Project Loon, the broadband-from-balloons project that emerged in June 2013. ®