Smartphone app is your virtual door key in limited trial 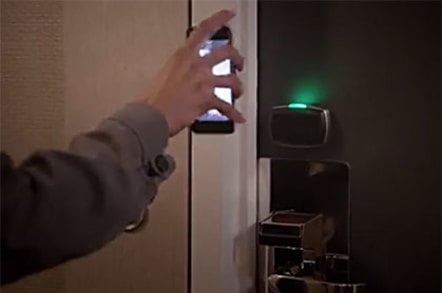 Today you can place calls with your smartphone, you can take photos with it, and you can make payments with it. And if a new pilot program being launched by Starwood Hotels & Resorts pans out, one day you may even be able to use it to open your hotel room door.

The system works via Bluetooth, the company said, and the apps will be compatible with Apple's iPhone 4s and later or Android smartphones running version 4.3 or later.

Customers who have the apps installed will be able to check in on their devices and then breeze right past the front desk to their rooms, without having to wait to be handed a key.

"We believe this will become the new standard for how people will want to enter a hotel," Starwood CEO Frits van Paasschen told the Wall Street Journal, adding that he believes the system could become the biggest thing for hotels since free Wi-Fi. "It may be a novelty at first, but we think it will become table stakes for managing a hotel."

For now, only the Aloft locations in New York's Harlem neighborhood and Apple's hometown of Cupertino, California will be testing the system, but if the pilot proves successful it could expand to other locations.

In addition to Aloft, Starwood is the parent company of eight other hotel chains, including Le Meridien, Sheraton, St. Regis, W, and Westin.

If you would like to participate in the wireless check-in test, you must be a member of the company's Starwood Preferred Guest loyalty program, and you can sign up to receive more information about the trial via its website. ®