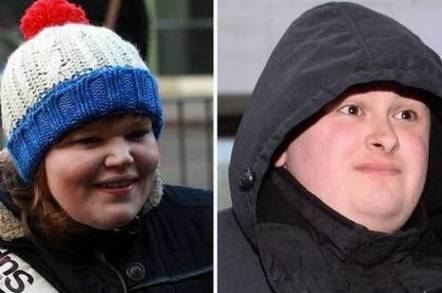 Two Brits were today jailed in the UK for abusing and threatening a feminist campaigner and an MP on Twitter.

The two trolls were arrested last year and charged with improper use of a public communications network under the Communications Act of 2003. Sorley had threatened Criado-Perez with "worse than rape" and joined Nimmo in attacking Creasy online when the MP came to Criado-Perez's defence.

At a sentencing hearing today in Westminster, London, Chief Magistrate Judge Howard Riddle jailed Nimmo and Sorley [PDF] and ordered them to each pay £800 in compensation to their victims. The trolling duo were spared any legal bills.

The pair were arrested separately last year for harassing Criado-Perez, who successfully lobbied to put author Jane Austen on an English bank note, and Creasy. According to the judge, the tweeted abuse had a profound impact on the women. Criado-Perez suffered significantly from Nimmo and Sorley's horrific antics, the court heard.

"She feared the abusers would find her and carry out the threats. She felt hunted. She remembers feeling terror every time the doorbell rang," said Judge Riddle.

"She has had to spend substantial time and money ensuring she is as untrackable as possible."

In sentencing, Judge Riddle noted a number of aggravating factors. Sorley, who claimed to have been drunk when firing off the abuse, was noted to have a history of drunk-and-disorderly charges, while Nimmo was said to have shown a lack of sympathy.

"In each case I have considered whether to suspend sentence," Judge Riddle wrote.

"However the serious harm caused by the offending behaviour makes it inappropriate to impose anything other than an immediate custodial sentence." ®