Small problem: it still makes up two-thirds of email traffic 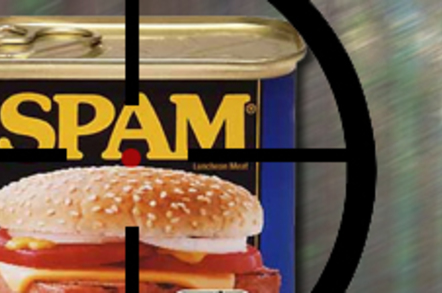 Spam email was down in volume last year, but junk mail messages still comprise two in three items of electronic communication sent over the interwebs.

Kaspersky Lab reports the portion of spam in email flows was as high as 69.6 per cent in 2013 – which is 2.5 percentage points lower than 2012. The biggest sources of spam were China (23 per cent) and the US (18 per cent), according to the Russian security firm.

The drop in spam mail last year follows a steady decrease since 2010. Kaspersky experts reckons that unscrupulous marketeers are turning away from email because it's becoming a less and less effective medium to promote their dubious wares.

In the last three years, the share of unsolicited messages has fallen by 10.7 per cent. It appears that advertisers increasingly prefer the various types of legitimate online advertising that are now available, which generate higher response rates at lower costs than unsolicited email can offer.

In some spam categories [such as travel and tourism], commercial advertising is being gradually displaced by criminal mailings, such as spam messages advertising illegal goods or pornography.

The percentage of emails with malicious attachments was 3.2 per cent - 0.2 percentage points lower than in 2012. Kaspersky adds that almost a third – 32.1 per cent – of phishing attacks were targeted at social networks. More than occasionally, these malicious missives were disguised as messages from genuine antivirus vendors, featuring attachments contaminated with banking Trojans such as ZeuS.

Darya Gudkova, head of content analysis at Kaspersky Lab, commented: "For the third year in a row the most prevalent malware spread by email were programs that attempted to steal confidential data, usually logins and passwords for internet banking systems. At the same time, however, phishing attacks are shifting from bank accounts to social networking and email."

She added: "This can be partly explained by the fact that today’s email accounts often give access to a lot of content, including email, social networking, instant messaging, cloud storages and sometimes even a credit card."

More details on spam and malicious email trends in 2013 can be found in a blog post on Kaspersky Lab's official Securelist blog here. ®

What can you do about it for now? Sweet 2FA