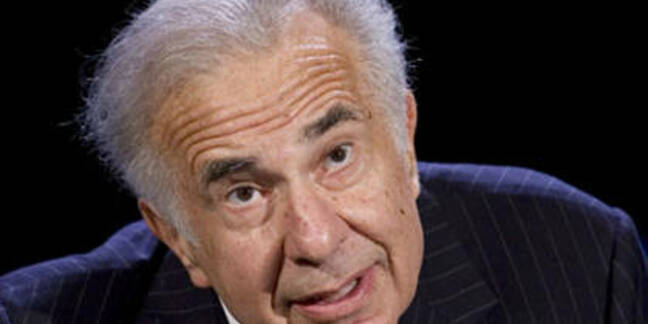 Activist investor Carl Icahn has yet again called on Apple to start scooping a few handfuls off its mountain of cash and handing it back to shareholders. His latest call came after he upped his stake in the fruity firm by a whopping $500m.

The agitating stockholder tweeted that he'd upped his share of the fruity firm to $3.6bn and he still wanted the company to start thinking about a much bigger share buyback scheme to get money back into investors' pockets:

Bought another $500mil of $AAPL tday, bringing our total to $3.6 billion. If board doesn’t see AAPL’s ‘no brainer’ value we sure do.

In a seven-page letter to fellow Apple shareholders, Icahn said that the company's suggestion that it needed to keep all its money because of the competitive tech landscape and its own rapid pace of innovation was "almost irrational".

"We find its position overly conservative (almost to the point of being irrational), when we consider that the company had $130 billion of net cash as of September 28, 2013 and that consensus earnings are expected to be almost $40 billion next year," he wrote. "Given this massive net cash position and robust earnings generation, Apple is perhaps the most overcapitalised company in corporate history, from our perspective."

Icahn added that if Apple didn't want to bring money home from its overseas operations to pay for his proposed additional $50bn share buyback, because it didn't want to pay tax on repatriating it, it would be both easy and cheap for the company to borrow the money.

Apple has been resisting Icahn's efforts to up its share buyback scheme for months now. The company is already repurchasing $60bn worth of stock and has said that it has already returned $43bn to investors in dividends and repurchases.

But Icahn, who is famous for agitating for change at major corporations, wants more from Cupertino.

Apple isn't the only tech firm Icahn would like to see some changes at either. Earlier this week, he urged eBay to consider spinning off PayPal, despite owning less than a one per cent stake in the firm. eBay said that it appreciated the suggestion, but it wanted to hang on to the unit for now. ®