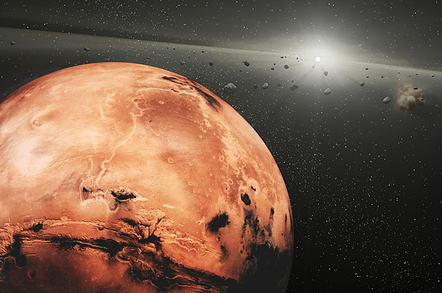 Pic While its flashy younger brother Curiosity is getting all the headlines these days, the Opportunity rover will shortly be celebrating its tenth anniversary on the Red Planet (not bad for a machine expected to last for 90 days) and NASA has revealed a selfie to mark the anniversary. 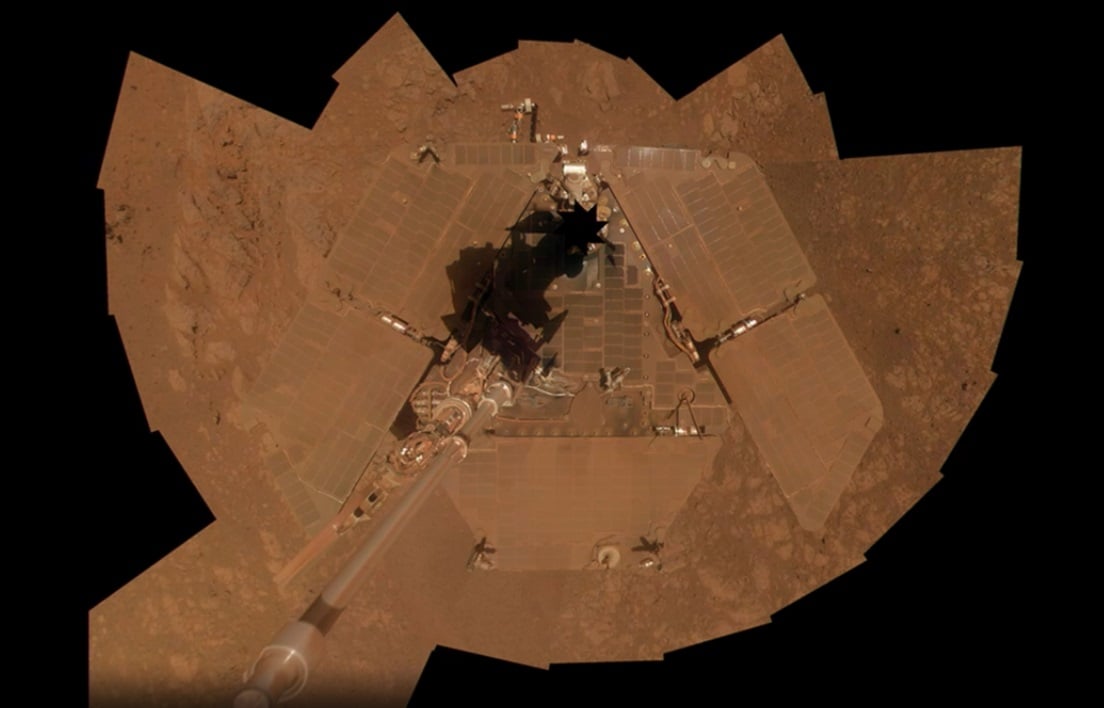 Do you think I'm dead sexy? Opportunity, the dusty denizen of the Martian plains, snaps a selfie (click to enlarge)

Spirit, Opportunity's now-defunct sister, landed on the Mars on January 4, 2004. But Opportunity hit the Red Planet just weeks later, on January 25, bouncing off the surface while surrounded by airbags before coming to a halt and taking a look around. Since then it has covered 38.7 kilometers of the rocky Martian surface, and taken more than 170,000 images and relayed them back to Earth using the satellites NASA has in orbit.

"It's a well-made American vehicle. These are excellent machines, they are well designed, they're well built, they're fantastic and that's why they're still working," said Dr Ray Arvidson, deputy principal investigator for the Mars Exploration Rover.

The rover is feeling its age, however. Jon Callas, Opportunity's project manager, explained that the right front steering actuator is frozen and he described the rover's robotic arm as "arthritic." Two of the rover's ten instruments had stopped functioning, but Callas said that nothing had gone wrong in the last year and the rover will be ready to roll when summer comes.

Callas explained that the key to Opportunity's longevity was a miscalculation by NASA about how Martian dust would hinder its solar panels. The 1997 Pathfinder mission was NASA's first shot at trying solar power on Mars, but dust accumulation via electrostatic cling killed the system in months. 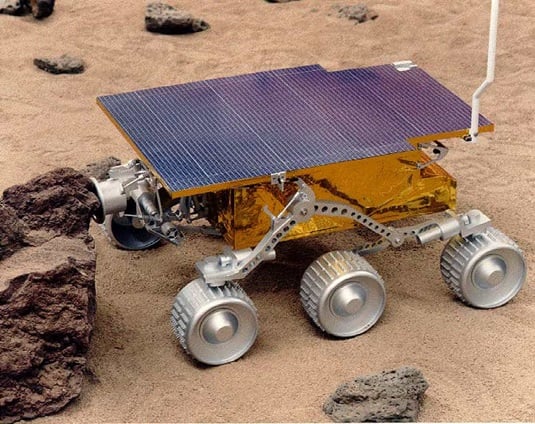 Pathfinder's Sojourner rover was a bit of a dust magnet

Opportunity rides higher in the air and the occasional strong winds of Mars have helped keep its solar panels relatively clean, Callas explained. Just in the last week there had been a "wind event" and the performance of the panels had jumped from 47 per cent to more than 60 per cent. These blasts can't be predicted, he said, but do appear somewhat related to the seasons.

To back this up, there has been some intensive development work on software for running systems at very low power. Programers at the space agency's Jet Propulsion Lab, and elsewhere, have devised economical subroutines to avoid draining the rover's lithium-ion batteries too much while protecting the robot against the extremes of life on Mars.

"The amazing thing is that these vehicles go through an amazing temperature cycle every day, the temperature change from night to day is greater than the change from summer to winter," Callas said. "They are constantly fatigued by this – it's kind of like going from the Sahara Desert to Antarctic every single day without a change of clothing."

The reliability of the rover's flash memory is also a concern. There's a limit to how often the data held in the chips can be overwritten, and dead spots are appearing. Storage optimization code perfected on the Spirit rover has been useful for dealing with this, but Opportunity is slowly getting more senile. 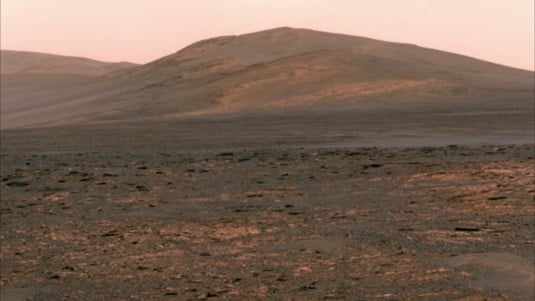 Opportunity faces a mountain to climb before braving Cape Tribulation

With the Martian solstice just weeks away the rover will begin to get more sun, and is being readied for a two-year mission to climb the nearest hill to the south and reach the top – which NASA has rather peculiarly named Cape Tribulation.

Its quest is to find deposits of mineral clays, the presence of which has been indicated by satellite reconnaissance. Opportunity will drill into these and see what can be found – that is, if NASA continues to fund the mission.

Opportunity costs about $14m a year to run and Dr Michael Meyer, lead scientist for NASA's Mars exploration program, said there would be a senior mission review to look at the operating budgets of the Mars missions and see which, if any, will be turned off so that savings can be made.

"Frankly, it would be a shame not to have enough to afford the continuation of those missions but we'll see how that turns out," Dr Meyer said.

He explained that the ultimate goal of Opportunity, Curiosity, and forthcoming Mars projects is to help Man set foot on the dust world. To that end he would be willing to share data with commercial space operations such as Elon Musk's SpaceX.

It wasn't all lofty ideals at the press conference, however. During a Q&A session, Star Trek's William Shatner send in a tweet asking if NASA had eliminated the possibility of "Martian rock throwers" as the source of the mysterious doughnut-shaped stone that appeared in front of Opportunity unexpectedly. 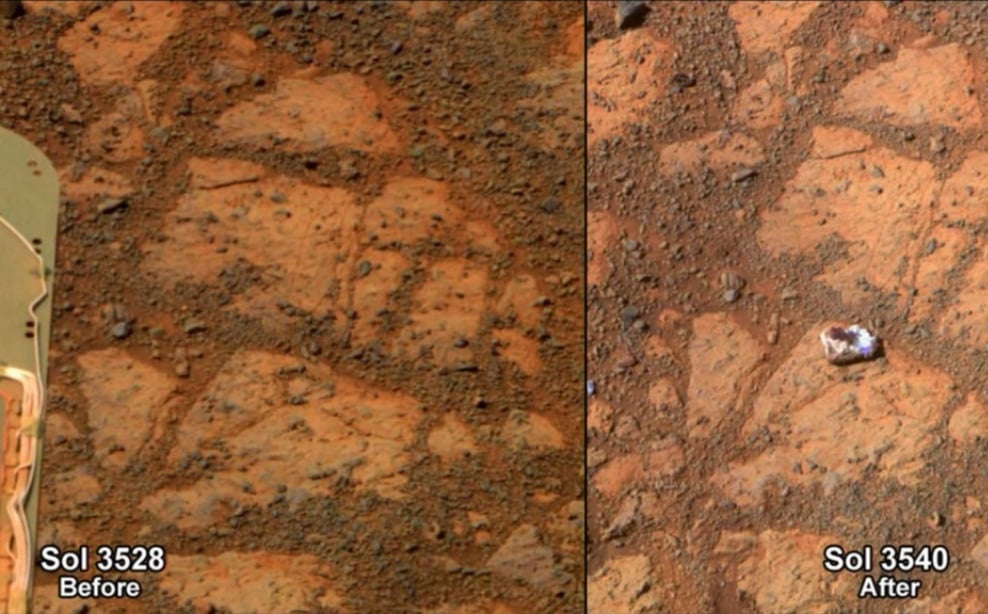 NASA Mars Exploration Rover lead scientist Steve Squyres said that investigations of the rock are still ongoing using Opportunity's microscope and spectrometer, but they had narrowed its appearance window down to within a four-day window.

While there's still a slight chance that the rock is debris from a meteorite strike, the most likely solution is that it was kicked out of the Martian rock by one of the rover's six wheels. The bot performed a "pirouette" slightly uphill of its current position, and the team thinks the stone came from there, but there's a solar panel in the way of Opportunity's cameras at the moment.

"It appears that the rock has flipped itself upside down, and if that's the case then we're seeing the underside of the rock that hasn’t seen the Martian atmosphere for perhaps billions of years. We're seeing stuff that we don’t normally get to see," Squyres said.

"We're seeing a strange composition, different than anything we're seen before. There's a lot of sulphur in it and very high concentrations of manganese; more manganese than we've ever seen in a Martian rock, and a high concentration of magnesium. We're still working this out and are making measurements right now – this is an ongoing story of discovery." ®