Bitcoin baron donation started a flood: 'leccy bill paid and then some 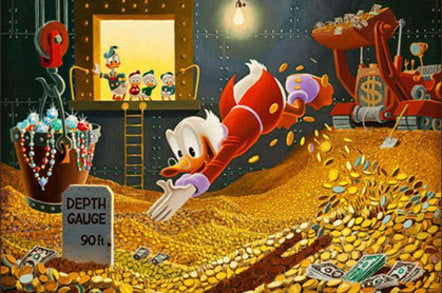 The cash-strapped OpenBSD Foundation has raised $100,000, potentially saving it from the brink of oblivion.

The Foundation has had pledges of "around" $100,000 from individuals and organisations following its appeal to cover a $20,000 server electricity bill.

The Reg reported on 17 January that the Foundation had warned it was unable to cover the bill and would go out of business.

An updated Significant Foundation Contributors’ page lists Google as a contributor as well as the MPEx Bitcoin Stock Exchange created by Romanian Mircea Popescu, from whom a reported $20,000 was received this week.

“To all of you who have donated, please allow me to give you a huge ‘thank you’,” OpenBSD developer Bob Beck wrote here. “We have in one week gone from being in a dire situation to having a commitment of approximately $100,000 in donations to the Foundation.”

“We would like to continue to build on your groundswell of support, and have set a target for $150,00 this year in fundraising,” Beck wrote.

OpenBSD is used widely used in firewalls and a variety of edge servers such as email, DNS and intrusion detection servers because it is considered incredibly secure. Its base system includes a number of popular third-party packages such as SQLite, BIND, Sendmail and the Lynx web browser. ®