IBM trudges onward despite hardware weight around its neck

Will Lenovo be the Samwise to relieve Big Blue's server burden? 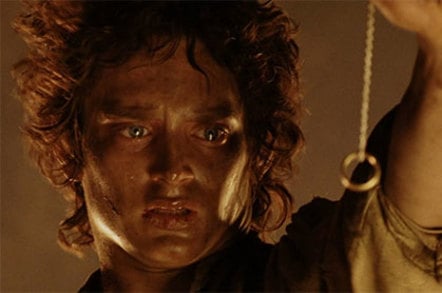 IBM reported fourth-quarter earnings that were a mixed bag on Tuesday, with hardware remaining the chief thorn in Big Blue's side – as has been the case throughout its fiscal 2013.

On the other hand, IBM's earnings for the quarter managed to beat analysts' expectations, at $6.13 per diluted share rather than the estimated $5.99 per share. Profits were up, too, with net income growing 6 per cent from the same period a year ago, to $6.2bn. Yet annual net income was down 0.7 per cent, to $16.5bn, and IBM's full revenue breakdown for Q4 painted a worrisome picture.

Once again, the lion's share of this quarter's sales decline was felt in its hardware division. Revenues for the System and Technology group were just $4.3bn for the fourth quarter, a 26.1 per cent slump from the year-ago period.

That followed a pattern that began in the first quarter of fiscal 2013 and continued throughout the year, with annual System and Technology revenues down 18.7 per cent from 2012, to $14.4bn.

During a conference call with financial analysts on Tuesday, IBM CFO Martin Schroeter pointed to Big Blue's storage business, its System x line, and its Power servers as particular problem areas for the hardware group. Revenues for those three categories were down 13 per cent, 16 per cent, and 31 per cent from the year-ago quarter, respectively.

But while he hemmed and hawed about "rightsizing" the Power line and even "divesting businesses," one thing Schroeter did not announce was any specific plan to sell off System x, IBM's line of x86 servers, which has been battered by cheaper competition as sales of white-box servers continue to rise.

Many industry folk believe IBM is close to a deal with Lenovo to unload that underperforming division, having successfully sold off its PC hardware business to the Chinese tech giant in 2004, but the latest scuttlebutt says price negotiations are proving difficult.

Meanwhile, Big Blue's other divisions fared better, although the meager gains they experienced were not enough to offset the System and Technology group's decline.

Software revenues in the quarter were up 2.8 per cent from Q4 of 2012, to $8.1bn. The WebSphere middleware family led that growth, with year-on-year revenues up 14 per cent in 2013. In general, sales of IBM's middleware products – including Information Management, Rational, Social Workforce Solutions, Tivoli, and WebSphere – were up 5 per cent in Q4 over the previous year's quarter, while operating systems revenues were down 3 per cent.

The Global Business Services division also grew its revenues in the quarter, but not by much. Sales were up 0.6 per cent from the fourth quarter of 2012, to $4.74bn, while annual sales sank to $18.4bn, a 0.9 per cent dip.

Such estimates might be optimistic, however. With no clear end in sight for the broader PC industry's woes, the next two years could be tough ones for Big Blue if it can't right its flailing hardware business – or better yet, get rid of it, as persistent rumors suggest is its plan. ®