Just how dead is Schrödinger's cat? 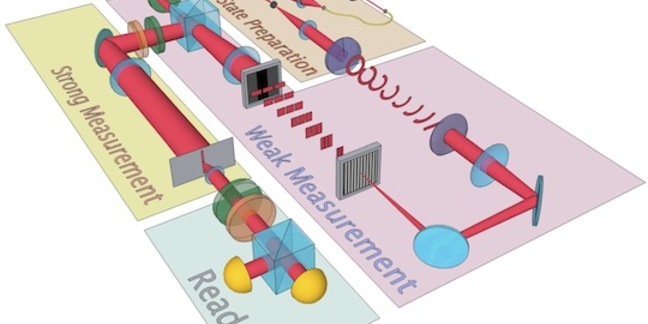 One of the key tenets of quantum mechanics, that it's impossible to measure a quantum state without collapsing the wave function, has taken an arrow to the knee, courtesy of a University of Rochester experiment.

Building on work carried out in 2011 at the National Research Council of Canada, the UoR researchers say they've directly measured a 27-dimensional quantum state without destroying it.

The UoR researchers worked with the orbital angular momentum state of a light beam. OAM refers to the “twistedness” of the beam, and since it exists as a quantum state, its various possible states exist simultaneously in superposition.

The traditional view of quantum mechanics, expressed in the famous (but famously misunderstood) “Schrödinger's cat” thought experiment, is that observing the quantum states will collapse the wave function. You can only view the cat as alive or dead, not both. In the case of the light beam, taking a “strong” measurement of the beam will collapse the wave function and yield a single value for its orbital angular momentum. 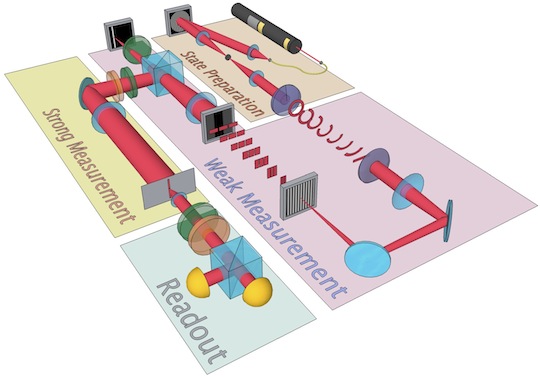 Schematic of the University of Rochester quantum state characterisation experiment

To characterise all of the states that existed before they collapse, the university explains, would usually require a tedious process called quantum tomography (if you don't mind Wikipedia, it's explained here). The researchers describe quantum tomography as being like creating a 3D image using a large number of 2D images.

In their “direct measurement” experiment, the UoR researchers say they've sped up the process of characterising the quantum system of the light beam. They do this by taking “weak” measurements followed by “strong” measurements.

The weak measurements disturb the quantum system without making it collapse: each weak measurement is of low enough quality that it only yields partial information about the quantum state. After enough weak measurements, the researchers say, they can build up a statement of the probability of the system's different states – in other words, is the cat in Schrödinger's box more likely to be alive or dead?

The strong measurement then collapses the wave function of a second variable.

In other words, in The Register's understanding (the author will accept correction on this point), the experiment essentially builds a dataset based on repeated weak-then-strong measurements, that tabulates:

This yields a plot from which the superpositions can be inferred much more quickly than using quantum tomography. To quote the university press release:

“This sequence of weak and strong measurements is then repeated for multiple identically prepared quantum systems, until the wave function is known with the required precision.”

Simultaneously is and isn't bollocks